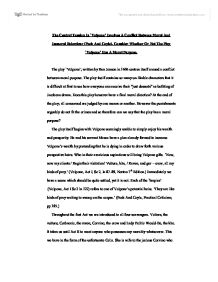 The Central Tension In `Volpone' Involves A Conflict Between Moral And Immoral Behaviour (Peck And Coyle). Consider Whether Or Not The Play `Volpone' Has A Moral Purpose.

The Central Tension In `Volpone' Involves A Conflict Between Moral And Immoral Behaviour (Peck And Coyle). Consider Whether Or Not The Play `Volpone' Has A Moral Purpose. The play `Volpone'; written by Ben Jonson in 1606 centres itself around a conflict between moral purpose. The play itself contains so many un-likable characters that it is difficult at first to see how everyone can receive their "just desserts" as befitting of Jacobean drama. Does this play however have a final moral direction? At the end of the play; all concerned are judged by one means or another. However the punishments arguably do not fit the crimes and so therefore can we say that the play has a moral purpose? The play itself begins with Volpone seemingly unable to simply enjoy his wealth and prosperity. He and his servant Mosca have a plan already formed to increase Volpone's wealth by pretending that he is dying in order to draw forth various prospective heirs. Who in their avaricious aspirations will bring Volpone gifts. `Now, now my clients / Begin their visitation! Vulture, kite, / Raven, and gor - crow, all my birds of prey.' (Volpone, Act I, Sc 2, ln 87-89, Norton 7th Edition.) Immediately we have a scene which should be quite settled, yet it is not. ...read more.

What moral purpose does it serve to see Celia and Bonario punished while the `animalia' (http://www.sparknotes.com/drama/volpone/themes.html) of fox, fly, vulture, raven, crow and kite are free to continue with their own avaricious purposes? We must remember that it is not the greed of Corbaccio, Corvino and Voltore that bring about their own downfall; it is that of Mosca and the stupidity of Volpone that construct this. It is Mosca's greed and lust for power that leads to the downfall of all as he becomes Volpone's heir and when pronouncing Volpone dead, becomes the lord and master. It is in his greed that he will not relinquish his power. To a certain extent; has he not earned this power? Mosca `the parasite' (Volpone Act V Sc 12 Ln 107 Norton 7th Edition); has been the most cunning of all and played on the sinful nature of the wealthy to feed his own designs for prosperity. He is willing however, to share with Volpone; it is this transaction that forces Mosca to attempt to seize control of all Volpone's wealth as oppose to the half which he desires. 'MOSCA (aside to Volpone): Will you give me half? VOLPONE : First I'll be hanged.' (Volpone Act V Sc 12 Ln 63 Norton 7th Edition.) ...read more.

(Volpone Act V Sc 12 Ln 150 - 151 Norton 7th Edition.) Is it not true that apart from his attempted rape of Celia, he has really only acted on the greed of others; immorality that was already present. Yet Volpone is virtually sentenced to death whilst Corvino the man who would have allowed his wife to be raped by this man simply has to spend a little time in the pillory. Celia herself who has been through the biggest trial of all receives her freedom as her compensation. Her dowry money is trebled when she is returned to her father yet she would not be the one to use it. Bonario by comparison receives the entirety of his father's wealth. This is of course, a mere reflection on social ideology of the period. Women would have been second rate citizens without question. However it does illustrate that although the moral purpose in Volpone is apparent in the traditional way that the play ends ie the moral prosper, the immoral do not; it is done to a questionable extent. The punishments given out undermine true morality, certainly biblical morality - a sin is a sin in any guise and the conventional morality we have now. There may have been a moral purpose to the play; yet there is no moral relevance to today. Word Count 1365 ...read more.