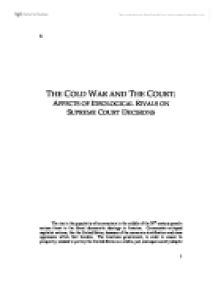 THE COLD WAR AND THE COURT: AFFECTS OF IDEOLOGICAL RIVALS ON SUPREME COURT DECISIONS

S THE COLD WAR AND THE COURT: AFFECTS OF IDEOLOGICAL RIVALS ON SUPREME COURT DECISIONS The rise in the popularity of communism in the middle of the 20th century posed a serious threat to the liberal democratic ideology in America. Communists critiqued capitalist nations, like the United States, because of the economic stratification and class oppression within their borders. The American government, in order to ensure its prosperity, needed to portray the United States as a stable, just and equal society despite domestic and economic tension America that plagued the nation at the time. In an effort to look united and prosperous in light of the rise of competing ideologies, particularly communism, during the 20th century, the Supreme Court of the United States of America allowed legislation that exceeded the Constitutional powers granted to Congress and the executive, particularly in regards to civil rights and education; moreover, this judicial activism waned as the ideological threat of the Soviet Union collapsed in the 1990s. During the late 19th and early 20th centuries, the Supreme Court continually struck down government legislation that failed to rigidly adhere to the Constitution, particularly in the case of civil rights. The Court, for example, decided in 1883 that the Fourteenth Amendment failed to encompass private acts of discrimination but only state action that is discriminatory, and therefore, Congress possesses no right to enact laws banning private bigotry (Mannino 9/30). In his opinion Justice Bradley wrote, "...there must be some stage in the progress of [the emancipated slave's] elevation when he takes the rank of a mere citizen, and ceases to be the special favorite of the [laws]." (Sullivan 868) Furthermore, in Bradwell vs. Illinois (1873), the Court ruled against women's rights by stating that the right to practice law was not protected by the immunities clause and, therefore, a State could ban women lawyers (Mannino 10/21) Finally, in the case that defined the era, the Lochner vs. ...read more.

Prior to the ideological conflict, the 1896 decision in Plessy vs. Ferguson set the legal precedent regarding equality in the classroom. The Court asserted, in a Justice Brown opinion, that the Fourteenth Amendment does not abolish the differences between the races and that the "separation but equal" law failed to violate equal protection because it made no inferences about an "inferior race." (Sullivan 638) But as the Southern race riots broke out in the 1950s and were televised throughout the world, America could no longer afford to seem intolerant towards blacks if its egalitarian ideology was going to survive. Consequently, in 1954, the Court handed down a monumental decision in Brown v. Board of Education in which the bench ruled that the "separate but equal" policy that dominated the late 19th and early 20th centuries violated the Equal Protection Clause. The Court turned its back on its previous conclusion that the "separate but equal" doctrine did not distinguish an "inferior race" and inferred that the policy detrimentally affected black children (Sullivan 646) This assumption that the "separate but equal" policy hindered minorities set the precedent and laid the foundation for a series of civil rights reforms starting in the mid-1950s thus highlighting America's continual and devout commitment to liberty and equality in light of Moscow's attempt to do the same during the de-Stalinization period. To uphold this image of racial equality, the Court continued to rule in favor of civil rights groups through out the rest of the Cold War. In Heart Atlanta Motel vs. United States (1964), for example, the Court ruled that the Heart Atlanta Motel could not refuse to rent rooms to black individuals. The Court affirmed its belief indicated in United States vs. Darby that Congress could regulate commerce for any purpose. To illustrate, Justice Clark wrote for the Court: That Congress was legislating against moral wrongs in many of these areas rendered its enactments no less valid. ...read more.

(515 U.S. 200, 115 S. Ct 2097, 132 L.Ed2d 158) Marshall implies that the affirmative action legislation enacted during the Cold War exceeded the powers delegated by the Constitution to America's limited government yet; the doctrine encourages the notion of equality that Liberal ideology promotes. This conflict of Liberal ideals, created by an over-ambitious government attempting to appear more just in light of Cold War tensions, is what the Court must now deal with. To illustrate, Pilon writes, "However tentatively and uncertainly, the Rehnquist Court is at least moving toward the questions that the New Deal Court simply pushed aside to make way for the modern state." (Pilon) The New Deal Court, which lasted through the end of 1980s, fought hard to eliminate racial tension in the United States without regard for many of the Constitutional questions it gave birth to as a result of this relentless effort to integrate America. In conclusion, the Rehnquist Court must now cope with the enlarged federal government that the Cold War Court created. In an effort to appear more just and equality-driven in light of competing political ideologies the Court extended the powers of the Federal government to grant an expansion of civil rights. Now, The Supreme Court will likely rely more on precedent than on the actual Constitution since many of the Cold War decisions stretched the intentions of the Constitution. The Cold War Court's decisions, however, are justified by the fact that the Court needed to assure the posterity of the American system in light of competing political and social theories. It is easy to forget the serious threat that these ideologies, particularly communism, posed to America starting with the Great Depression and lasting through the fall of the USSR. As America now faces another attack on its ideology, this time by radical Islam, the Court will, undoubtedly, need to once again evaluate its position on critical Constitutional issues and how that will affect the future of the American way. ...read more.