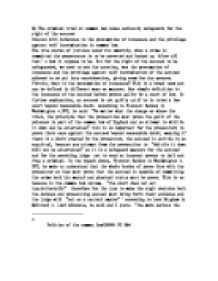 The criminal trial at common law takes seriously safeguards for the right of the accused Discuss with reference to the presumption of innocence and the privilege against self incrimination in common law.

Q) The criminal trial at common law takes seriously safeguards for the right of the accused Discuss with reference to the presumption of innocence and the privilege against self incrimination in common law. The true course of justices never run smoothly, when a crime is committed the perpetrator is to be arrested and locked up. After all that's how it suppose to be. But for the right of the accused to be safeguarded, we need to ask the question, was the presumption of innocence and the privilege against self incrimination of the accused adhered to or put into consideration, giving room for due process. Firstly, what is the presumption of innocence? This is a broad term and can be defined in different ways or manners. One simple definition is the innocence of the accused before proven guilty by a court of law. In further explanation, an accused is not guilty until he is tried a law court beyond reasonable doubt. According to Viscount Sankey in Woolmington v.DPP, he said "No matter what the charge or where the trial, the principle that the prosecution must prove the guilt of the prisoner is part of the common law of England and no ...read more.

Also any evidence, testimonial or statement obtained under compulsion could not be admissible in court. Every accused is entitled to a legal solicitor in any criminal interview if they feel the answer they might give might incriminate them. To buttress this, am going to look at some previous cases in which the accused feels incriminated in their responses during criminal interviews. The most compelling case was the case of Sunders v. United Kingdom. In this case the accused Mr Sunders was convicted of conspiracy, false accounting and theft relation to share dealings, during the investigation, the police rely on section 434(5) of the company Act 1985, which made it an offence to refuse to answer questions posed by Inspectors appointed by the Department Of Trade and Industry (DTI) we were made to understand that the accused as supply answers to the investigators which might incriminate him in court. The DTI inspectors relied on the accused testimonial in court; therefore Mr Sunders was convicted of the charges. In 1996, Mr Sunders appealed to the European Court of Human Right that his right under Article 6 of the ECHR has been violated. The ECtHR found that there was a breach of Article 6. ...read more.