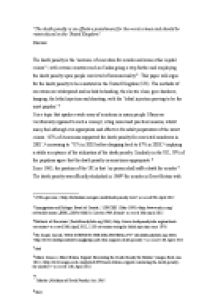 The death penalty is an effective punishment for the worst crimes and should be reintroduced in the United Kingdom. Discuss

﻿?The death penalty is an effective punishment for the worst crimes and should be reintroduced in the United Kingdom?. Discuss. The death penalty is the ?sentence of execution for murder and some other capital crimes?[1], with certain countries such as Sudan going a step further and employing the death penalty upon people convicted of homosexuality[2]?. This paper will argue for the death penalty to be reinstated in the United Kingdom (UK). The methods of execution are widespread and include beheading, the electric chair, gas chambers, hanging, the lethal injection and shooting, with the ?lethal injection proving to be the most popular?.[3] It is a topic that sparks a wide array of emotions in many people. Many are vociferously opposed to such a concept, citing moral and practical reasons, whilst many feel although it is appropriate and effective for adult perpetrators of the worst crimes. ?67% of Americans supported the death penalty for convicted murderers in 2001?,[4] increasing to ?71% in 2002 before dropping back to 67% in 2003,'[5] implying a stable acceptance of the utilization of the death penalty. Similarly in the UK, 59% of the populous agree that the death penalty is sometimes appropriate.[6] Since 1965, the position of the UK is that ?no person shall suffer death for murder?[7]. The death penalty was officially abolished in 1969[8] for murder in Great Britain with Northern Ireland following soon after in 1973[9]. More recently in 1998 the death penalty was abolished for all crimes, treason included.[10] This paper will be split into three sections; the ...read more.

Since the death penalty was abolished, ‘official crime figures show the UK also has a worse rate for all types of violence than the U.S,’[27] which employs the death penalty. When taking into account the rise in population vs. the increased crime rate, the rates for unlawful killings in the UK have more than doubled since the abolition of the death penalty,[28] strongly suggesting the existence of a positive correlation between employment of the death penalty and deterrence of crime. Secondly, it certainly also ‘deters’ the individual criminal from re-offending. There is no possibility of a re-offence if said criminal is not alive to offend. Even if such a criminal were to serve multiple life sentences and never get out, there is still the danger that he may pose to members of staff within the prison, as well as other inmates. In short, the death penalty is both logically and mathematically proven to be a significant deterrent to crime. Money is a finite resource, that shouldn’t be squandered without reason. Especially now that the UK is in recession,[29] the prison system has limited resources to deal with these criminals.[30] ‘Each new prison place costs £170,000 to build and maintain, and the cost per prisoner per year is £41,000;’[31] an alarming statistic considering that maintaining a prisoner for a year is almost double the GDP per capita in the UK.[32] Are perpetrators of the worst crimes really worth double what the average hardworking British taxpayer is? ...read more.