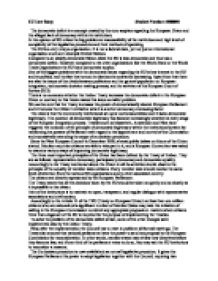 The democratic deficit is a concept created by the euro sceptics regarding the European Union and the alleged lack of democracy within its institutions.

EU Law Essay Student Number: 0900091 The democratic deficit is a concept created by the euro sceptics regarding the European Union and the alleged lack of democracy within its institutions. In the opinion of EU critics the big problem is inaccessibility of the institutions and high level of complexity of the legislative procedures and their methods of operating. The EU is a very unique organisation. It is not a federal state, yet not just an international organisation such as in example United Nations. Compared to an ideally democratic Nation-State the EU is less democratic and thus has a democratic deficit. However compared to the other organisations like the World Bank or the World Trade Organisations the EU has a democratic surplus. One of the biggest problems with the democratic issues regarding the EU is low interest in the EU and its politics, and the fact that turnout in elections is constantly decreasing. Apart from that there are also the issues of the divide between politicians and the general population on European integration, technocratic decision-making process, and the activism of the European Court of Justice (ECJ). There is no consensus whether the Lisbon Treaty increases the democratic deficit in the European Union or contrary to this thesis makes this issue a smaller problem. ...read more.

It is rather strange to ask the ordinary citizen to approve or reject a new treaty which is based on older provisions and all the pre-existing measures on which the process of integration has been based since the creation of the European Community Act 1972. In my opinion the referendum should concern exclusively the new provisions of this treaty (assuming that all the previous measures are already agreed). If it also concerns the provisions which are already in force it should give the citizens the possibility of voting for the withdrawal from the EU if they are not satisfied with its objectives and legislation. If the subject of the referendum is not clear it gives a huge possibility for all the demagogues to deprecate not just the new legislative elements, but also the ones which were discussed thousands of times before, like European social model or the competition rules, which are functioning satisfactorily in the opinion of the majority of Member States. Apart from that, referendums can be criticised as populist. As I mentioned before the regular citizens are not able to understand the complexity of the treaties, and the scope of changes they make after the rectification. ...read more.

The role of the European Parliament increases significantly with every Treaty amendment, but some of the areas seem to be left untouched by the legislature even when criticised6. In my opinion the law making process within the EU is transparent enough for the member countries citizens as long as they are truly interested in the topic. Since the enactment of the citizen's initiative it is easy for interest groups to express the opinions about the legal system, or apply for the consideration of proposed modifications to it. Thanks to the various internet and paper sources it is fast and easy to access all the legislation documents concerned with policy making including the debates of the Council of Ministers. All the actions taken by the EU organisations are under continuous supervision of European Court of Justice and member countries courts to ensure the accountability of policy makers within the EU. However before trying to solve all of these problems we need to take into attention the fact that EU is "one of a kind" organisation. It has got unique structure and functioning, incomparable to anything which has existed before. Therefore, even though the EU still has to fulfil some of the requirements of the democratic legitimacy, the way they must be applied cannot resemble any classical, both national and international models. ...read more.