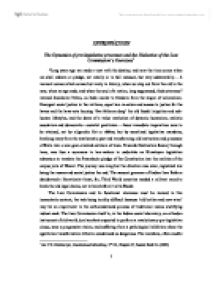 INTRODUCTION The Dynamics of pre-legislative processes and the Dialectics of the Law Commission's Exercises1 "Long years ago we made a tryst with the destiny, and now the time comes when we shall redeem or pledge, not wholly or in full measure, but very substantially... A moment comes which comes but rarely in history, when we step out from the old to the new, when an age ends, and when the soul of a nation, long suppressed, finds utterance" intoned Jawaharlal Nehru, as India awoke to freedom from the stupor of colonialism. Emergent social justice to the millions, equal law-in-action and access to justice for the haves and the have-nots burying 'five fathoms deep' the old feudal iniquities and sub-human lifestyles, and the dawn of a value revolution of dynamic humanism, realistic secularism and democratic-socialist positivism ---these immediate imperatives were to be attained, not by oligarchic fiat or dikhat, but by sensitized legislative mandates, breaking away from the anathematic past and transforming old institutions and processes of State into a new goal-oriented activism of laws. Towards Destination Swaraj through laws, was thus a summons to law-makers to undertake an Himalayan legislative adventure to translate the Preambular pledge of the Constitution into the realities of the corpus juris of Bharat. The journey was long but the direction was clear, legislated law being the means and social justice the end. The nascent grammar of Indian Law Reform desiderated a liberationist thrust; for, Third World countries needed a militant mood to break the old legal chains, not to bow before it with Bhakti. The Law Commission and its functional relevance must be viewed in this iconoclastic context, the task being terribly difficult because 'old bottles and new wine' may be an experiment in the self-condemned process of traditional means stultifying radical ends. The Law Commission itself is, in the Indian social laboratory, an orthodox instrument of old-world jural acrobats expected to perform a revolutionary pre-legislative circus, sans a progressive vision, and suffering from a pathological inhibition about the egalitarian transformation hitherto condemned as dangerous. ...read more.

Hari Singh Gaur moved a resolution in the Constituent Assembly (Legislative) recommending the establishment of a statutory law revision committee. The resolution was withdrawn on Dr. Ambedkar, the then Law Minister, giving an assurance that the Government would device some suitable machinery for revising laws. The matter was raised again in the Lok Sabha on June 27, 1952 and Law Minister C.C. Biswas gave an assurance that the Government recognized the task of law revision as being of vital importance. On July 26, 1954, the All-India Congress Committee resolved that "a Law Commission should be appointed as in England to revise the laws promulgated nearly a century back by the Law Commission of Macaulay and to advise on current legislation from time to time."11 Finally, on November 19, 1954, the Lok Sabha discussed a non-official resolution to the following effect, "this House resolves that a Law Commission be appointed to recommend revision and modernization of laws, criminal, civil and revenue, substantive, procedural or otherwise and in particular, the Civil and Criminal procedure Codes and the Indian Penal Code, to reduce the quantum of case-law and to resolve the conflicts in the decisions of the High Courts on many points with a view to realize that justice is simple, speedy, cheap, effective and substantial."12 The Government of India accepted the principle underlying the resolution regarding appointment of a Law Commission. On 5th August, 1955, the Law Minister C.C. Biswas announced in the Lok Sabha the decision of the Government to appoint a Law Commission and also the tasks of the Law Commission as follows: (a) to review the system of judicial administration in all its aspects and suggest ways and means for improving it and making it speedy and less expensive; (b) to examine the Central Acts of general application and importance, and recommend the line on which they should be amended, revised, consolidated or otherwise brought up to date. ...read more.

must have the best juristic talent and should have representation from social sciences. Ideally, it should have a multi-disciplinary approach, both at the level of the secretariat as well that of the Commission. Ideally, again, it must engage in a comprehensive, sociologically oriented, systematic programme of reform not just of the layers' law, but of legal institutions and processes. It ought to be a monitoring agency, a planning body, for the future of the Indian Legal System at a national level. It ought to have national status and prestige as an integrating agency for law reform in India, just as the Planning Commission.17 Also there is a vital need for a high-powered Law Commission with statutory authority, original jurisdiction, research assistance, functional dynamism and multi-disciplinary composition. The reports of the Commission must be accompanied by draft bills drawn up with the Law Ministry's participation and involvement of other concerned Ministries. Even the parliamentary parties must be consulted actively and substantially and their views authentically incorporated in the reports. The Soviet Legislative Commissioners do consult experts and others and their reports are almost the finalized form of the legislation. We in India must be able to streamline and rationalize the legislative process and make it less time-consuming. This can be achieved by comprehensive processing intelligently made and democratically drawn up by the pre-legislative institution called the Law (Reform) Commission. The great need is to come down to the common people, rouse their creative response and make them the vicarious law makers of India. The legislators of today are too busy to be informed, too illiterate to be experts, but their enlightened cooperation is a condition precedent to success. We need not imitate the limitations of the West. We have great talent, immense scholarship, latent creativity, but still we lad behind in low-making suited to the Indian genius and needs of the masses. Hence it could be concluded by citing Australian Law Commission's issue: "The West can teach the East how to get a living, but the East must eventually be asked to show the West how to live. ...read more.