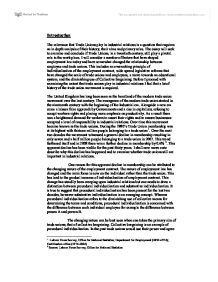 The essay will seek to examine and conclude if Trade Unions, in a twentieth century, still play a pivotal role in the work place. I will consider a number of factors that have shaped employment law today and have somewhat changed the relationship between

Introduction The relevance that Trade Unions play in industrial relations is a question that requires an in depth analysis of their history, their aims and primary roles. The essay will seek to examine and conclude if Trade Unions, in a twentieth century, still play a pivotal role in the work place. I will consider a number of factors that have shaped employment law today and have somewhat changed the relationship between employee and trade unions. This includes an overarching principle of Individualisation of the employment contract, wide spread legislative reforms that have changed the scale of trade unions and employees, a move towards an educational system, and the diminishing use of Collective bargaining. Before I proceed with examining the extent that trade unions play in industrial relations I feel that a brief history of the trade union movement is required. The United Kingdom has long been seen as the heartland of the modern trade union movement over the last century. The emergence of the modern trade union started in the nineteenth century with the beginning of the Industrial era. Alongside a new era came a laissez faire approach by Governments and a rise in capitalism; refusing to accept workers rights and placing more emphasis on productivity. As a result there was a heightened demand for workers to assert their rights and to ensure businesses accepted a level of responsibility in industrial relations. Over time this movement became known as the trade unions. During the 1980's Trade Union membership was at its highest with thirteen million people belonging to a trade union1. Over the next two decades the movement witnessed a general decline in membership resulting in only seven and a half million people belonging to a trade union in 2007. ...read more.

This explanation is facilitated with the above argument in that by introducing legislation it has enabled individuals to have rights and coupled with a heightened awareness of those rights mean that they are becoming self aware and thus less reliant on trade unions. The move towards a self informed work force has its grounding with the introduction of the Advisory, Conciliation and Arbitration Service (ACAS) in 1975. With it's introduction came a new way of dealing with industrial relations, placing greater emphasis on the individual by allowing them to access the information on rights in a coherent and clear manner without the need of trade union input. It is true to say that the rise of the internet and other media sources has led to this heightened awareness of rights, as Jenkins and Johnson point out in their article5, so it is hardly surprising the more and more employees know of their obligations the less trade unions have to inform them about. Not only have trade unions lost this pivotal role they have further lost their advocacy role in disputes that may arise. Today individual employees can and do have the power to represent themselves, once again diminishing the role of trade unions as they would have been the figurehead representing the employees. Alongside this move the work force has witnessed Employers becoming more aware of issues such as pay and have, as a result adopted their businesses and created excellent human resource departments. The rise in HR departments has lead to less violations of terms and conditions and therefore has resulted in less breach and less industrial disputes, which trade unions are normally involved in. ...read more.

It should not be thought however that trade unions and their role to hold strikes has been abolished from the modern industrial relations setting. A current example of their importance is the British Airway case12. The case has been going on now for over a year and strikes have been planned. The full force of the Union involved has been impressive and perhaps suggests a future revival of striking as a means to solve industrial disputes. However for the time being, it remains that Trade Unions have lost a great deal of their influence when it comes to striking. Alongside legislative reforms which have had a negative effect on Trade Unions public support has dwindle which in turn has reduced the level of involvement in industrial relations. In conclusion, there are many reasons that can explain why the Trade Union movement has seen a decline. It would be completely wrong to assert that Trade Unions have no place in industrial relations in a modern twentieth century, however the significance and importance of Unions over time has waned. The future of Trade Unions remains a mystery. The United Kingdom is living through one of the worse recessions in years so it may be that as job loses occur and standards decrease the Trade Union movement will be resurrected. In my opinion the involvement by Trade Unions in industrial relations is now minimal and since the economy is looking to the private sector to create jobs whilst through the turbulent economic times is set to further decline since more and more people will join the private sector, and as noted earlier private sector trade union density is low. This will result in even less involvement by Trade Unions. ...read more.