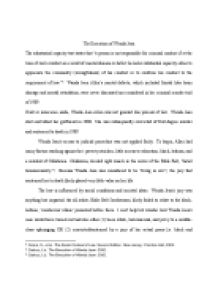 The Execution of Wanda Jean. Wanda Jean Allens mental defects, which included frontal lobe brain damage and mental retardation, were never discussed nor considered in her criminal murder trial of 1989.

﻿The Execution of Wanda Jean The substantial capacity test states that ?a person is not responsible for criminal conduct if at the time of such conduct as a result of mental disease or defect he lacks substantial capacity either to appreciate the criminality (wrongfulness) of his conduct or to conform his conduct to the requirement of law.?[1] Wanda Jean Allen?s mental defects, which included frontal lobe brain damage and mental retardation, were never discussed nor considered in her criminal murder trial of 1989. Guilt or innocence aside, Wanda Jean Allen was not granted due process of law. Wanda Jean shot and killed her girlfriend in 1988. She was subsequently convicted of first-degree murder and sentenced to death in 1989. ...read more.

black and similarly situated). With regard to legal fairness, Wanda Jean's constitutional rights were violated in several ways: First, her public defender requested removal from her original case in 1988 after learning of the state's intention to pursue the death penalty. Because he had never defended a death penalty case, he, admittedly, lacked the necessary experience and requested withdrawal. His request was denied; so much for the constitutional right to assistance of counsel. Secondly, Wanda Jean sustained brain damage to her frontal lobe in early childhood. Studies have indicated that frontal lobe damage results in the lack of inhibition and impulse control, particularly under conditions of stress. This evidence of brain damage and mental impairment was never presented in her original trial. ...read more.

In fact, Wanda Jean?s attorneys had prepped her for potential questions from the board. At the end of Wanda Jean?s tearful speech for clemency, the board was asked if they had any questions -- to which they responded with a resounding ?no?. Wanda Jean Allen was executed in January of 2001. This case was an abhorrent miscarriage of justice and a disturbing example of inequities within our criminal justice system. Years ago, I was more idealistic in terms of repairing our system. However, after observing countless legal proceedings, I must admit that I do not even know where or how to begin. Where does change start? ________________ [1] Grana, S., et al. The Social Context of Law. Second Edition. New Jersey: Prentice Hall, 2002. [2] Garbus, Liz. The Execution of Wanda Jean. 2002. [3] Garbus, Liz. The Execution of Wanda Jean. 2002. ...read more.