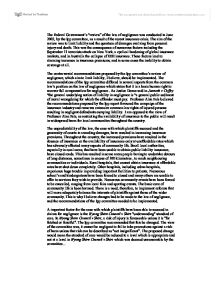 The Federal Government's &quot;review&quot; of the law of negligence - The aim of the review was to limit liability and the quantum of damages evolving from personal injury and death.

The Federal Government's "review" of the law of negligence was conducted in June 2002, by the Ipp committee, as a result of the recent insurance crisis. The aim of the review was to limit liability and the quantum of damages evolving from personal injury and death. This was the consequence of numerous factors including the September 11 terrorists attack on New York, a cyclical hardening of global insurance markets, and in Australia the collapse of HIH insurance. These factors lead to alarming increases in insurance premiums, and in some cases the inability to obtain coverage at all. The controversial recommendations proposed by the Ipp committee's review of negligence, which aim to limit liability, I believe, should be implemented. The recommendations of the Ipp committee differed in several aspects from the common law's position on the law of negligence which states that it is a basic human right to recover full compensation for negligence . As Justice Deane said in Jaensch v Coffey "the general underlying notion of liability in negligence is "a general public sediment of moral wrongdoing for which the offender must pay. Professor Alan Fels believed the recommendations proposed by the Ipp report favoured the campaign of the insurance industry and removes extensive common law rights of injured persons resulting in negligent defendants escaping liability. I am opposed to the view of Professor Alan Fels, as restricting the availability of insurance to the public will result in widespread harm for local communities throughout the country. ...read more.

will be relevant to consider on a subjective basis, what the plaintiff would have done if the defendant had not been negligent. The recommendations of the committee on the issue of causation, should result in it being more difficult for plaintiff's to prove causation and hence prove negligence. The review recommended that the standard of care for professionals generally is to be determined by reference to what could be reasonably expected of a person professing the skill at the date of the alleged negligence. In respect of malpractice claims, the committee viewed that there needed to be a change to the standard of care applicable to a medical practitioner. A medical practitioner will not be negligent if the treatment provided was in accordance with an opinion widely held by a significant number of respected practitioners in the field, unless the opinion is irrational. This recommendation is basically an extension to the Bolam test with a more limited role for the court. This recommendation was aimed at preventing reliance being placed on localised practices that are removed from conventional professional activities, would filter out personalised opinions and ensure that the applicable belief is soundly based. This, it was thought, would be a far more reliable test than Bolam. These recommendations by the committee are aimed at reducing the number of instances in which a medical practitioner has acted negligently in giving treatment. This was the result of the relative ease at which plaintiff's were receiving compensation in this area. ...read more.

However, the committee believed there needed to be a limit placed on such these types of claims. The panel recommended caps of gratuitous services based on average weekly earnings and also recommended a threshold on the basis that damages for gratuitous services should not be recoverable unless such services have been provided or it is likely that they will be provided for more than six hours per week and for more than six successive months. In concluding, the Ipp report contained numerous recommendations on the law of negligence, as a result of rising insurance premiums. The aim of the recommendations was to "limit liability and the quantum of damages evolving from personal injury and death". Many believed, including Professor Alan Fels that the recommendations put forward by the committee were anti-consumer, in that they promoted the interests of narrowly focused groups (insurance companies) at the expense of ordinary people, in that plaintiff's will not be compensated for the negligence of wrongdoers. However, I disagree with this view and believe the recommendations made were for the benefit of the wider community. Reform, in this instance was necessary in order to ensure insurance is made available and affordable to communities throughout Australia. Without these reforms, there would be widespread devastation to individuals and communities who would have been unable to obtain insurance. I believe the proposed recommendations still ensure plaintiff's will be compensated sufficiently for negligent acts, while at the same time averting a potential disaster which would have been caused in the absence of insurance to both individuals and the community. http://www.courts.qld.gov.au/publications/articles/speeches/2003/atkin100203.pdf http://www.ebsworth.com.au/ebsworth/website/eepublishing.nsf/AttachmentsByTitle/E&EInsuranceReviewDec2002/$file/Civilliabilityreform.pdf http://www.agd.nsw.gov.au/sc%5Csc.nsf/pages/ipp_1002032 ...read more.