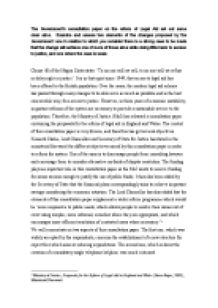 The Governments consultation paper on the reform of Legal Aid set out some clear aims. Examine and assess two elements of the changes proposed by the Government

﻿The Government?s consultation paper on the reform of Legal Aid set out some clear aims. Examine and assess two elements of the changes proposed by the Government: one in relation to which you consider there is a strong case to be made that the change will achieve one of more of those aims while doing little harm to access to justice, and one where the case is weak. Clause 40 of the Magna Carta states: ?To no one will we sell, to no one will we refuse or delay right or justice?. It is in that spirit since 1949, that access to legal aid has been offered to the British population. Over the years, the modern legal aid scheme has passed through many changes to be able serve as much as possible and in the best conceivable way, free access to justice. However, in these years of economic instability, important reforms of the system are necessary to provide a sustainable service to the population. Therefore, the Ministry of Justice (MoJ) has released a consultation paper containing the proposals for the reform of legal aid in England and Wales. The content of this consultation paper is very diverse, and therefore has got several objectives. Kenneth Clarke, Lord Chancellor and Secretary of State for Justice has stated in the ministerial foreword the different objectives aimed by this consultation paper in order to reform the system. One of the aims is to discourage people from consulting lawyers and encourage them to consider alternative methods of dispute resolution. ...read more.

However some points need to be clarified concerning the establishment of this new structure. Albeit they have stated that they agreed with the proposals for reform, the Royal College of Psychiatrists also specified in their response that the consultation paper does not provide enough information and that the draft of ?the reasoning that supports the proposed categorisation is not provided?. Moreover, the Law Centre affirmed in their response that they agree with the need for regulation but they ?do not wish to see a situation where, in appropriate cases, a legally aided client should not be able to instruct the same experts as paying clients?[2]. This therefore shows that this consultation paper is not entirely accepted by everyone. Undeniably, there are some areas of this consultation paper which have been very criticised and rejected by many respondents. One of these areas of reforms concerned the establishment of a system to provide advice and information services by telephone to legal aid seekers. 1. Proposal to establish a single mandatory telephone helpline Inspired from the Community Legal Advice (CLA) helpline, the telephone service proposed by the Government would be the only access to civil legal aid services. This means that legal aid seekers would have to contact this helpline, and the operator will examine the client?s problem and see if that person is eligible for receiving legal aid. After this step, the operator will discuss the different available options and guide them to the appropriate service including legal aid specialists, a paid for service, or alternative sources of help. ...read more.

Such a system would, over time, become a liability as it would amount to unnecessary additional expenditure. As an illustration, many respondents used the scenario where a client who was at first stage advised by an operator, would have afterwards to consult a face-to-face provider to solve his issues. This clearly shows that the telephone helpline would be economically ineffective on a long term basis. The consultation paper published by the Ministry of Justice in 2009 is very mixt. There are numerous elements which have for objective to promote access to justice but also limit expenditures to have a sustainable service. One of the elements appreciated by many respondents in this consultation is the proposal to put in place a new set of expert fees which would allow limiting costs, without putting access to justice in danger. However there are many elements such as the establishment of a telephone helpline which were disapproved by respondents. The Government has decided to launch this system in four areas of the law while taking some exceptions into account when the case is an emergency or the client is either a child or in detention. Overall, this consultation paper was much criticised and only a few elements which were already present in the system were approved. Therefore, the Ministry of Justice has consecrated an annex in the consultation response towards the alternatives proposed by a few respondents. In its response, the minister has stated that ?these legal aid changes constitute a substantial set of very bold reforms, the overall effect of which should be to achieve significant savings whilst protecting fundamental rights of access to justice?. ...read more.