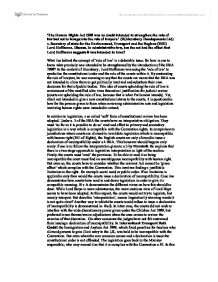 'The Human Rights Act 1998 was no doubt intended to strengthen the rule of law but not to inaugurate the rule of lawyers.' (R(Alconbury Developments Ltd) v. Secretary of state for the Environment, Transport and the Regions (2001) Lord Hoffmann. Discuss.

'The Human Rights Act 1998 was no doubt intended to strengthen the rule of law but not to inaugurate the rule of lawyers.' (R(Alconbury Developments Ltd) v. Secretary of state for the Environment, Transport and the Regions (2001) Lord Hoffmann. Discuss. In administrative law, has the act had the effect that Lord Hoffmann suggests it was intended to have? What lies behind the concept of 'rule of law' is a debatable issue. So how is one to know what precisely was intended to be strengthened by the introduction of the HRA 1998? In the context of Alconbury , Lord Hoffmann was using the 'rule of law' to symbolise the constitutional order and the role of the courts within it. By contrasting the rule of lawyers, he was meaning to say that the courts are aware that the HRA was not intended to allow them to get politically involved and substitute their own decisions for that of public bodies. This idea of courts upholding the rule of law is reminiscent of the modified ultra vires theoretical justification for judicial review (courts are upholding the rule of law, because that is what Parliament intends). Yet, albeit not intended to give a new constitutional status to the courts, it is questionable how far the powers given to them when reviewing administrative acts and legislation involving human rights were intended to extend. ...read more.

The authority would not be seen as acting incompatibly if that is the way proscribed by primary legislation-s.6 (2). Again courts are bound by Parliament. But could it be said that the new and high standard of review- proportionality impinges somehow on this relationship between the courts and the legislature? The proportionality test is not the first instance of stringency of judicial scrutiny. For example, a heightened test was employed in ex parte Smith. This while more rigorous than the Wednesbury grounds for review, was occupying a medium position in comparison with judicial substitution of judgment, whereby the court imposes what it believes to be the correct meaning of the term or issue for review. Looking at the process of judicial review and the way in which proportionality test applies it could be said that it too is at a medium position in the spectrum of stringency. In case of interference the courts have to decide several things. Firstly, whether there has been a right interfered with and legislation which allows this, then whether there is a legitimate purpose served by this interference. If there is the courts have to determine whether the interference with the right is proportionate. It could be seen that the proportionality inquiry comes rather late in the general enquiry of review. ...read more.

and private bodies (Leonard Cheshire), which may exercise 'public' functions. The borderline between the latter two can be tenuous. It relation to providing accommodation it appears that the two cases above have settled the issue. But what is some other act of public nature is performed by a hybrid public authority. It is what very clear from Lord Woolf's speech in Donoghue when a private act would turn into one which is regarded as public. This is an important point as only the pure and the hybrid public authorise are covered by the new judicial review jurisdiction under the HRA. Oliver has been in favour of a more restricted view of public authority in the 'hybrid' sense, because to classify one as a public authority would deprive them of the benefit of the Act. He is therefore in favour of promoting rights through 'indirect horizontal effect'. This however has not been perceived as the role of the court. From the discussion above it could be seen that the HRA has had considerable implications for administrative law. There is a new ground for judicial review-proportionality and courts have power to review primary and secondary legislation and issue declarations of incompatibility. Whether the intention to fit this new roles of the courts with the existing constitutional order, as Lord Hoffmann contends, succeeds remain to be seen from the rigour which the courts would apply this new rights. As demonstrated above, they have tried to maintain a balance. ...read more.