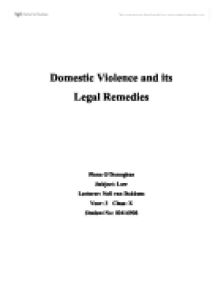 The Irish Government is run by men for men. The victim of Domestic violence is hidden from public view, with little or no remedies available to her.

Domestic Violence and its Legal Remedies Fiona O'Donoghue Subject: Law Lecturer: Neil van Dokkum Year: 3 Class: X Student No: 00416908 The Irish Government is run by men for men. The victim of Domestic violence is hidden from public view, with little or no remedies available to her. INTRODUCTION Firstly, this statement completely neglects the male victims of domestic violence. It should be acknowledged that women are not the only sufferers of violence in the home. Five hundred and forty-nine victims of domestic violence made contact with the OSS Cork: Domestic Violence Information Resource Centre during the first three years of operation. Of these, fifteen percent were male (www.osscork.ie, 2000). Domestic Violence is a crime. It is an abhorrent abuse of power and an impingement of a person's human rights (www.justice.ie, 1999). Violence in the home is a recognised socio-legal problem, which can affect people from all cultures and economic status. The traditionally predominant idea that women are inferior to men, and are thus, the property of their husbands or male partners, has been identified as being partly to blame (UN General Assembly, 1993). A study undertaken by Dobash and Dobash and cited with approval by the Task Force demonstrates that 90-95% of victims availing of protective civil remedies are women. In reality, therefore, remedies available are centred on relief for battered women in the home (O'Herlihy, 2002). ...read more.

exceptional cases could originally be obtained on an ex parte basis where there was an immediate or serious risk and a protection order would not be sufficient (Law Society of Ireland, 2001). However, this provision was ruled unconstitutional due to the absence of time limits, which represented a breach in ordinary rules of a fair procedure in a judgment of the Supreme Court in 2002 (Kennedy, 2003). It was felt by the court that this order had harsh consequences for the respondent and this spouse should be entitled to having their defence heard. The response to this was the Domestic Violence (Amendment) Act 2002. This order would now lapse after eight days unless the court confirms the order after hearing the respondent's evidence. Also, a note of the evidence must be served to the respondent following an ex parte interim barring order being granted (van Dokkum, 2004). Protection Order Section 5 of the 1996 Act allows for the making of a protection order, which gives relief similar to that of the safety order and can be obtained on an ex parte basis. This order does not compel the respondent to leave residence, but requires them to refrain from using or threatening to use violence against, molest or put in fear the applicant or dependent person, or from watching or besetting the place in which the applicant or dependent person resides. ...read more.