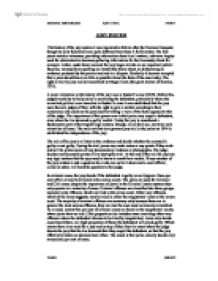 JURY SYSTEM The history of the jury system it was imported to Britain after the Norman Conquest, though its early functions were quite different from those it fulfils today. The first jurors acted as witnesses, providing information about local matters, and were largely used for administrative business gathering information for the Doomsday Book for example. Lather, under henry second, the jury began to take on an important judicial function, moving from reporting on events they knew about, to deliberating on evidence produced by the parties involved in a dispute. Gradually it became accepted that a juror should know as little as possible about the facts of the case today. The right to trial by jury can be traced back to Magna Carta (the great charter of liberties, 1215). A major milestone in the history of the jury was in Bushell's case (1670). Before this, judges would try to bully juries in convicting the defendant, particularly where the crime had political over tones but in Bushell's case it was established that the jury were the sole judges of fact, with the right to give a verdict according to their conscience and could not be penalised for talking a view of the facts opposed to that of the judge. The importance of this power now is that juries may acquit a defendant, even when the law demands a guilty verdict. Today the jury is considered a fundamental part of the English legal system, though, as we shall see, jury tries only minorities of cases. The main act that now governs jury trial is the juries act 1974 is established the independence of the jury. The role of the jury is to listen to the evidence and decide whether the accused is guilty or not guilty. During the trial jurors may make notes or any points if they wish and will be given copies of any documentary evidence or photographs. ...read more.

The clergy the Runciman Commisson saw no logical for the existence of this exception and recommended its abolition, but it still exists. The last group is people on bail in Criminal Justice and Public Order act 1994 following a recommendation made by the Runciman Commisson. People who have duties that are considered more important than jury service may chose whether or not they wish to serve. These include MPs members of the House of Lords, member s of the armed forces and doctors and nurses (see box e for full list in jury summons). People over 65 can also be excused as Right following an extension of law by s.42 of the Criminal Justice and Public Order act 1994. Practising members of a religious society or order whose beliefs are incompatible with jury service are excused from performing such service anyone who was has done jury service within the last two years. There will also be other people who don't want to do jury service and they have to explain their reasons in writing to the court. If they have sufficiently good reason, they will be excused from doing jury service on that occasion, but may have to do it in the future. Good reasons include being too ill to go to court, business appointments, having a holiday booked or even having an examination to take or child care problems, personal involvement with the facts of the case, or conscientious objection. Where appropriate, jury service may be deferred rather than excusal is called a discretionary excusal, since it is up to the court to decide whether that person should be excused or not. If a person is not excused he must attend court on the date given on the summons or risk being fined for failing to do so. The maximum fine for non-attendance is 1,000 pounds. Where there is some doubt about a potential jurors capacity to serve because of deafness, language problems or infirmity, for example the judge will decide whether to discharge the person concerned. ...read more.

The court of Appeal held that it would not interfere with a or (b) was likely to have been prejudiced. In this case the court considered that if there was any bias it was likely to be in favour of the defendant. A jury will sometimes come to a verdict that is just rather than legally correct. In recent years juries, in cases with exceptional circumstances, have refused to follow the letter of the law and considered that only an acquittal would be a just verdict. Clive ponting was acquitted of a charge under the official secrets Act, although the judge. Informed the jury that the accused had no defence in law. In 1992, Stephen Owen shot a man who, by reckless driving, had killed his son. The jury acquitted Mr Owen, while it was almost certain that a judge sitting alone would have held him to be guilty. The juries in these cases must have considered that justice was best served with an acquittal. Some jurors dislike doing jury service or become bored and may rush the decision. There is a risk that member's of the jury will be bruited or threaded by the defendant's friends. Majority verdicts were introduced in order to make this move difficult, as at least three jurors will have to be "nobbled" to the effect the decision. The lower age limit of 18 is too young it could be said that a person of this age has not got enough experience of make such important decisions. Media coverage can cause jurors to form a biased view of the case. This occurred in a murder case involving 2 sisters in 1993. Some newspapers published a still picture from a video sequence that gave a false impression of what was happening. After the jury convicted the defendants, the trial gave leave to appeal because of the possible influence the media coverage might have had on the decision and the court of Appeal quashed the convictions. MICHAEL BROCHOUSE JURY TRIAL PAGE 1 PAGE1 08/05/07 ...read more.