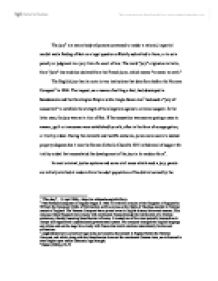 The jury1 is a sworn body of persons convened to render a rational, impartial verdict and a finding of fact on a legal question officially submitted to them, or to set a penalty or judgment in a jury trial of a court of law. The word "jury" originates in Latin, from "juris"-law and also derived from the French jurer, which means "to swear an oath." The English jury has its roots in two institutions that date from before the Norman Conquest2 in 1066. The inquest, as a means of settling a fact, had developed in Scandanavia and the Carolingian Empire while Anglo-Saxon law3 had used a "jury of accusation" to establish the strength of the allegation against a criminal suspect. In the latter case, the jury was not a trier of fact. If the accusation was seen as posing a case to answer, guilt or innocence were established by oath, often in the form of compurgation, or trial by ordeal. During the eleventh and twelfth centuries, juries were sworn to decide property disputes but it was the Roman Catholic Church's 1215 withdrawal of support for trial by ordeal that necessitated the development of the jury in its modern form4. In most criminal justice systems and some civil cases which need a jury, panels are initially allotted at random from the adult population of the district served by the court concerned. In criminal cases, the jury is used in the Crown Court5 and there is no jury in the magistrates' court6, which try about 98 per cent of criminals' cases. The jury is thus used in only the 2 per cent of criminal trials which takes part in the Crown Court. ...read more.

If decisions of the jury can be questioned then there will be way too many cases to handle. Finalizing the jury's decision keeps this problem at bay. Thirdly, the jurors have to be protected from harassment, criticism and reprisals. Lastly, if there is no secrecy, then the jury system will be undermined by public discussion of jury deliberations. No information is to be leaked to the public and media as this will only intimidate the jurors from speaking their minds and giving their honest thoughts and hence influence the efficiency of the jury, so they say. As what Lord Falconer told BBC14 Radio 4's Today programme: "You've got to keep the deliberations of the jurors secret, they have got to be confident that they can deliberate with it never being published and only in the rarest possible occasions even being investigated in any way." Under the consultation, if a jury was influenced, for example by racial bias, then a court should investigate, Lord Falconer said. . However, the confidentiality principle states that the discussions of the jurors in the jury room are to be kept a secret and not known to the public15 will end up to be an offence for any member of a jury to disclose any information to any other party; even when there has been a miscarriage of justice. As long as there was deliberation, no matter what was discussed or how the jury arrived at the verdict, the confidentiality principle applies16 and failure to do so would result in s. 8 of the Contempt of Court Act 1981. As absurd as it may be, the rule was nonetheless applied in the cases of R v. ...read more.

If measures as stated above are taken, I am sure there will be a fair and just legal system. In a nut shell, the confidentiality principle is one which has proven to be controversial and contentious. There are a lots of argument between reforms or abolish the jury. However, I personally think that the jury system should stay. Besides that I do think that we need to seriously reconsider the use of "experts" in front of juries. A District Court jury, Malcolm Knox23 decided to write a book, Secrets of the Jury Room. He said he agreed with the calls for an overhaul of the jury system. "Not to abolish unanimous verdicts or to decrease jury sizes or, heaven forbid, reduce the use of juries, but to supply ordinary people with a clear guide to the criminal jury trial, to make the thing fairer and to let the community profit from the experience of those who undertake this pivotal civic duty." A leading British judge, Lord Justice Auld, has already said the British Court of Appeal should be allowed to investigate jury misbehaviour, whether it occurred during deliberations or not. However, in Mirza case, the law lords said it was such a fundamental departure from existing law that Parliament and not judges should be the ones to make the change. Lord Steyn said this would mean there would be no review even if jury members tossed a coin to arrive at a verdict or some urged a conviction because the accused was a black immigrant. "It is to the effect that in the interests of maintaining the efficiency of the jury system the risk of occasional miscarriages of justice may acceptably be tolerated. In other words, one must accept some dubious verdicts as to the cost for protecting the jury system. ...read more.