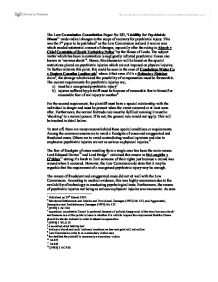 The Law Commission Consultation Paper No 137, Liability for Psychiatric Illness[1] made radical changes to the scope of recovery for psychiatric injury.he subject matter which has been in contention is negligently inflicted psychiatric illness also

The Law Commission Consultation Paper No 137, 'Liability for Psychiatric Illness'1 made radical changes to the scope of recovery for psychiatric injury. This was the 3rd paper to be published2 as the Law Commission noticed it was an area which needed substantial amount of changes, especially after the ruling in Alcock v Chief Constable of South Yorkshire Police3 by the House of Lords. The subject matter which has been in contention is negligently inflicted psychiatric illness also known as 'nervous shock'4. Hence, this discussion will be based on the special restrictions placed on psychiatric injuries which are not imposed on physical injuries. To further reiterate this point, this could be seen in the case of Cambridge Water Co v Eastern Counties Leather plc5 where it that even if it's a Rylands v Fletcher claim6, the damage which raised the possibility of compensation must be foreseeable. The current requirements for psychiatric injuries are; a) must be a recognised psychiatric injury7 b) injuries suffered by plaintiff must be because of reasonable fear to himself or reasonable fear of real injury to another8 For the second requirement, the plaintiff must have a special relationship with the individual in danger and must be present when the event occurred or at least soon after. Furthermore, the normal fortitude rule must be fulfilled meaning it must be 'shocking' to a normal person. If its not, the general rule would not apply. This will be touched in detail below. To start off, there are many reasons behind these special conditions or requirements. Among the common reasons are to avoid a floodgate of cases and exaggerated and fraudulent cases. Others are to avoid contradicting medical opinions and also to emphasize psychiatric injuries are not as serious as physical injuries.9 The fear of floodgate of cases resulting from a single case has been the main reason. Lord Edmund Davies10 and Lord Bridge11 criticised this reason in McLoughlin v O'Brian12 stating it's harsh to limit someone of their rights just because a crowd was around when it occurred. ...read more.

There are 3 possibilities on how a claim from a mere bystander could be successful; a) an exceptionally horrifying event leading to compensation b) simple exclusion from compensation c) compensation payable as long as conditions of proximity of event are satisfied This causes some obvious difficulties. Regarding the first scenario, deciding on the nature of event as horrific or not would be very subjective and would cause inconsistency. Regarding the 3rd scenario, it would open a floodgate of cases. The second option is inconsistent compared to the approach used in Donoghue v Stevenson44 where Lord MacMillan stated "the categories of negligence are never closed" and also approach by Justice Brennan in Sutherland Shire Council v Heyman45 favouring the development in tort law. The next requirement to claim for psychiatric illness is the witness must have witnessed the shocking event or was around soon after. This limb has been a subject of contention. In Hevican v Ruane,46 the judge decided that the plaintiff could claim for damages as he suffered from serious reactive depression after being told about the death of his son 2 hours after it occurred and identified his son at a mortuary 3 hours after it occurred. Justice Mantell stated the injury was foreseeable and there was a causal chain47. However, on appeal, the HOL states that the case of Alcock has stated that identification of bodies in a morgue does not satisfy this limb. This was also seen in McLoughlin v O'Brian48 the plaintiff, Mrs. Loughlin saw her husband and kids in a bloody, dirty and dishevelled appearance at a hospital after the accident was allowed to claim as it was in the 'immediate aftermath'. However, she arrived at the hospital several hours after the accident. Hence, what would suffice as 'immediate aftermath'? In Taylor v Somerset Health Authority49, the plaintiff tried to claimed damages on psychiatric injury suffered after the death of her husband after been negligently treated for months. ...read more.