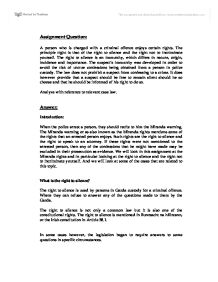 The law does not prohibit a suspect from confessing to a crime. It does however provide that a suspect should be free to remain silent should he so choose and that he should be informed of his right to do so. Analyze with reference to relevant case la

Assignment Question: A person who is charged with a criminal offence enjoys certain rights. The principle right is that of the right to silence and the right not to incriminate yourself. The right to silence is an immunity, which differs in nature, origin, incidence and importance. The suspect's immunity was developed in order to avoid the risk of untrue confessions being obtained from a person in police custody. The law does not prohibit a suspect from confessing to a crime. It does however provide that a suspect should be free to remain silent should he so choose and that he should be informed of his right to do so. Analyze with reference to relevant case law. Answer: Introduction: When the police arrest a person, they should recite to him the Miranda warning. The Miranda warning or as also known as the Miranda rights mentions some of the rights that an arrested person enjoys. Such rights are the right to silence and the right to speak to an attorney. If these rights were not mentioned to the arrested person, then any of the confessions that he might have made may be excluded in their prosecution as evidence. We will look in this assignment at the Miranda rights and in particular looking at the right to silence and the right not to incriminate yourself. And we will look at some of the cases that are related to this topic. What is the right to silence? ...read more.

Immunity against self-incrimination of an accused person was made in order to avoid the risk of the accused person in providing false confessions while he is in Garda custody. Immunity against self-incrimination has been developed in order to protect the accused from making false statements because of pressure or pain or also as well as what is known as judicial interrogation. Judicial interrogation occurs when the accused is asked questions aggressively by any police officer or a person in authority, and there he may give false statements. Justice O'Flaherty cited an early Irish text in the Supreme Court in the case of Heaney v. Ireland7 saying, " our law differs from the civil law, that it will not force any which commands every man to Endeavour his own preservation and therefore pain and force may compel men to confess what is not the truth"8. In the case of DPP v. Lynch9, an admission to murder was made by the appellant. The appellant in this case was questioned for 22 hours and was not allowed to sleep during that whole time and was not let talk with friends or family. These confessions were obviously obtained by unfairness and cruelty. Here the right to silence of the appellant was infringed. The privilege against self-incrimination and the right to silence are both related to presuming that the accused person is innocent until proved otherwise. These 2 rights go hand in hand. As a matter of fact, the constitutional right to silence is often called the privilege against self-incrimination. ...read more.