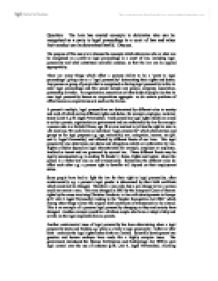 Question:  The Law has created concepts to determine who can be recognised as a party to legal proceedings in a court of law and when their conduct can be determined lawful.  Discuss.

The purpose of this essay is to discuss the concepts which determine who or what can be recognised as a party to legal proceedings in a court of law, including legal personality and what constitutes unlawful conduct, so that the law can be applied appropriately.

There are many things which affect a persons ability to be a ‘party to legal proceedings’ giving rise to a ‘legal personality’ determining their rights and duties.  Any person or group of people that is recognised as having legal personality is able to enter legal proceedings and this would include any person, company, association, partnership or trader.  An organisation, association or other body of people also has its own legal personality known as corporations aggregate  as do certain positions of office known as corporations sole such as the Crown.

A person’s multiple, legal personalities are determined by different roles in society and each of which carries different rights and duties, for example employee, motorist, tenant (Unit 6, p10 Legal Personality).  Each person has legal rights which are owed to us by a person, organisation or government and are enforceable by law for example a person who is a British Citizen, age 18 or over and not in jail has the right to vote in UK elections. We each have an individual ‘legal personality’ which characterises and groups us for legal purposes e.g. age, nationality, sex, occupation, income, etc (p9, unit 6, Legal Personality) and affected by different facets of our lives.  This legal personality also determines our duties and obligations which are enforceable by law.  Rights or duties depend on legal characteristics for example, employer or employee, landlord or tenant and are governed by current law.  These different facets may be legally unconnected e.g. in reading 19 Reader 1, Rules, Rights and Justice  where the person is a father but also an anti-vivisectionist.  Sometimes the different roles do affect each other e.g. a persons right to benefits will depend on their employment status.

Some people have had to fight the law for their right to legal personality, often controversially e.g. a person’s legal gender is determined by their birth certificate which could not be changed.  Therefore a man who had a sex change to be a woman could not marry a man.  This was changed in 2002 by the European Court of Human rights by the cases involving Christine Goodwin, in line with developments in Europe (p15 Unit 6 Legal Personality) leading to the ‘Gender Recognition Act 2004’ which among other things allows the original birth certificate of transsexuals to be altered.  This is an example of a persons legal personality changing as they and society have changed.  Another example would be a childless couple who have or adopt a baby and so take on the legal responsibilities as parents.

Another controversial issue of legal personality has been determining when a legal personality starts and finishes e.g. when is a baby a legal personality - before or after birth - certainly the legal rights before birth are limited.  Scientific development into genetics and human embryos have made this a highly complex issue.  The government introduced the Human Fertilisation and Embryology Act 1990 to give legal control over the use of embryos (p19, Unit 6, Legal Personality). Allowing embryonic research so as to help eradicate illnesses or protect the embryos as ‘having the capacity for life’ involves morality, religion and ethics all of which must be combined to provide legal guidance.  The House of Lords case AG Reference (No 3 of 1994), (Unit 6, Legal Personality) determined that an unborn child ‘does not have a distinct legal personality’ so an unborn foetus is not a ‘legal person’ the child becomes a legal person only once born.  This needs to be considered along with the Congenital Disabilities (Civil Liability) Act 1976 which helps to determine whether duty of care be owed to someone who legally does not exist

A person ceases to have legal personality when they die but this point of death is hard to determine legally.  In R v Malcherek and Steel (1981) 1 WLR 690 Lord Chief Justice Lane of the Court of Appeal stated that death was defined by ‘Irreversible death of the brain stem’. p22, Unit 6, Legal Personality). Legally, there must be a ‘moment of death’ when a person is no longer considered ‘alive’ and at which point they stop having a ‘legal personality’.  This used to be the point at which the heart stopped beating but advances in science have meant that a persons body can be kept ‘alive’ artificially.  The question of whether a person is being kept alive in this way can be considered to be alive in the context of ‘legal personality’ is difficult - is it murder to turn these machines off?.   The law now recognises ‘brain death’ so that is there is not electrical activity in the brain then legally that person is no longer ‘alive’.   The question of whether a person’s body should be artificially kept alive is a difficult one as demonstrated in Airedale National Health Service Trust v Bland (1993) AC 789, HL.

Diane Pretty’s case (Reading 22, Reader 1, Rules, Rights and Justice) who took her case to the Court of Human Rights and highlighted the issues of a person’s right to choose to die and the unlawfulness of assisted suicide as she would have needed help to end her own life due to her disabilities.  One of the problems would be the possible misuse of assisted suicide and that if the courts allow something for one person then they set a precedent for others.  There is a difference between keeping someone alive and helping them to die.  Doctors who withdraw life support treatment to allow someone to die of helping someone to commit suicide (p25 Unit 6, Legal Personality).  To take active steps to end someone’s life is morally and legally different to the passive action of not giving or accepting treatment.  In effect, though the illegality of assisted suicide in the UK (it is treated as murder), her rights as a legal personality were reduced and she was denied ‘autonomy over the choice of her own death’

People still have limited legal personality after death (p25, Unit 6, Legal Personality) as a will gives a legal duty to ensure that a persons wishes are met even after death e.g.  organ donors must have given consent prior to their death.

Some individuals are considered to have limited legal personality as the law needs to take into account what is in the best interests of the person both morally and ethically. This includes; the mentally ill, who may not understand the consequences of their actions so their legal capacity will be limited, Bankrupts who are disqualified from holding certain positions such as MP.

The largest section of society who have limited legal personality are children  They achieve legal rights at various stages, although these sometimes appear odd! E.g. they can work full time and marry at 16, drive at 17 but not vote until 18 while under 10s are not considered to have ‘sufficient understanding to be able to commit a crime’.

Legal personality gives us the right to refuse medical treatment.  Not so for children where the law allows parents/guardians to make medical decisions as part of a parent’s legal personality that is the rights or duties that are given to that person because they are a parent.  The law assumes that parents will act in the child’s best interests, unless questioned in the courts.  Reading 23 Reader 1, Rules, Rights and Justice  and activity 13 DVD is a case of the law courts representing the co-joined twins’ rights and making a decision on their behalf, overriding the parents wishes. The twins were considered as two individual legal persons to whom the court had legal responsibility so the children’s legal personalities were put before that of the parents.  The judge stated that this was a ‘very unique case’ which should not be used as precedent except in the exact same circumstances.  Yet in Reading 24 Reader 1, Rules, Rights and Justice, the Irish Supreme Court did not override the parents decision to withhold the PKU test, despite medical opinion.  This court put the parents’ legal personality before that of the child’s.

Along with determining legal personality, the law must also determine what constitutes ‘unlawful conduct’ that is ‘contrary to or forbidden by law‘. Unlawful conduct is not just criminal acts such as burglary but also covers civil disputes such as arguments over shared drive or when companies fail to deliver a service as well as family law.  The differences between civil and criminal law are the parties involved in the case, the remedies available and the standard of proof e.g. in civil law the level of proof is not as high as in a criminal case and the punishment is usually financial.

Our laws are based on the idea of fault that ‘there should be no punishment unless the individual is at fault’ 1932 Donoghue v Stevenson.  ‘You must take reasonable care to avoid acts or omissions which can reasonably foresee would be likely to injure your neighbour and civil law often involves negligence.  Example Haley v London Electricity Board 1965 (p44, Unit 7 Legal Personality).  To be guilty of most crimes a person must have committed the criminal act or actus reus in a certain mental state or mens rea e.g. to be guilty of robbery the defendant must have taken something and intended to permanently deprive the owner of his property. Legally the actus reus and mens rea combine to constitute an illegal act or crime which can be prosecuted in a court of law.

The laws which determine legal personality and the concept of what is unlawful have changed with society - until quite recently certain groups had few legal rights most notably women and ethnic minorities.  Women were not considered ‘persons’ politically until the 20th century and even then not to the same extent as men.  They   couldn’t vote until 1918 and only then if they were over 30 and land owners (p13 unit 6, Legal Personality ).  Technological developments such as the internet have given people more opportunities but laws have been needed for such things as copyright infringement, downloading music, defamation, slander and libel as well as accessing information and fraud.  Conduct must be identified as unlawful in order to protect individuals and society from harm and so concepts must be in place in order to make the laws enforceable.  While Parliament is instrumental in introducing and changing laws, the judiciary draws attention to ‘anomalies’ and often calls for change leading to a set of rules which develops over time .  A recent law against using a mobile phone while driving was introduced because of the increased in accidents causing by this technological advancement.

In conclusion, the law has created, and continues to create, concepts to determine who can be recognised as a party to legal proceedings in a court of law both criminal and civil, along with concepts to determine what conduct can be considered unlawful.  Legal personality and unlawful conduct relate through duty and responsibility as well as rights.  The concepts assist in deciding illegality via unlawfulness and fault and these concepts must be constantly assessed by both Parliament and the judiciary to keep up with changes in society.