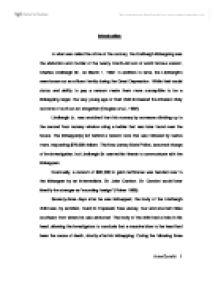 Introduction In what was called the crime of the century, the Lindbergh kidnapping was the abduction and murder of the twenty month-old son of world famous aviator, Charles Lindbergh Sr., on March 1, 1932. In addition to fame, the Lindbergh's were known as an affluent family during the Great Depression. While their social status and ability to pay a ransom made them more susceptible to be a kidnapping target, the very young age of their child increased the inherent risky outcome of such an act altogether (Douglas et al., 1992). Lindbergh Jr., was snatched from his nursery by someone climbing up to the second floor nursery window using a ladder that was later found near the house. The kidnapper(s) left behind a ransom note that was followed by twelve more, requesting $70,000 dollars. The New Jersey State Police, assumed charge of the investigation, but Lindbergh Sr. wanted his friends to communicate with the kidnappers. Eventually, a ransom of $50,000 in gold certificates was handed over to the kidnapper by an intermediate, Dr. John Condon. Dr. Condon would later identify the stranger as "sounding foreign" (Fisher 1999). Seventy-three days after he was kidnapped, the body of the Lindbergh child was, by accident, found in Hopewell, New Jersey, four and one half miles southeast from where he was abducted. The body of the child had a hole in his head, allowing the investigators to conclude that a massive blow to the head had been the cause of death, shortly after his kidnapping. During the following three years, numerous gold certificates from the ransom money turned up in circulation. The investigators' attempts to trace the bills to the perpetrator(s) of this crime was leading them nowhere except for providing a consistent physical description of a man just as Condon had described. More than three years later, a gold certificate from the ransom money was discovered, that had a license plate number written on it. ...read more.

The prosecution, linked Hauptmann to the kidnap ladder through four different elements: rail 16 came from a floor plank in Hauptmann's attic, the ladder displayed distinct tool marks possessed by Hauptmann, the wood used in building the ladder mainly came from a store where Hauptman bought his wood, and on one of his notebooks police found a sketch depicting part of the ladder and a dowel pin (Fisher 1984:125). As with the attic argument, Gardner tries to raise doubts on the validity of the work and experiments conducted by Koehler, the prosecution wood specialist. While recalling the cross-examination of Koehler by Defense Attorney Frederick Pope, Gardner speculates on "the pendency of this investigation" argument, reasoning that if Pope had insisted in this line of questioning Koehler would have been forced to admit how many planes he had tested, and how many pieces of wood that did not benefit the prosecution's case had been rejected or discarded (Gardner 2004:314). Again, Gardner tries to ignore the totality of the evidence present, by raising a red herring issue, despite evidence to the contrary. While commenting on the ladder evidence, Dr. Harold Dearden, British author and criminal psychologist, writes: "It was unanswerable. There was nothing in it to be denied or explained...And it damned him" (Dearden 1951:53). While searching Hauptmann's apartment, police found sketches of a homemade ladder and windows inside one of his notebooks. The sketch depicted part of the top section of a ladder that was very much like the one used in the kidnapping (Fisher 1984:195). When asked about it in September 1934, Hauptmann said that it probably was done by a visiting child. While on the witness stand, when cross-examined by Wilentz, Hauptmann denied that the drawings belonged to him (Fisher 1984:328). On this issue Gardner chooses to "rest". In challenging the results of the research conducted by Koehler to trace the components of the ladder, Gardner tries to make a point out of the fact that Koehler was contradictory in his statements regarding the three-quarter-inch wood chisel used on the ladder (Gardner 2004:133-134). ...read more.

The prosecution witnesses were able to prove that that Hauptmann was also the person who sent the package, containing the baby's sleeping suit to John F. Condon (Fisher 1984:304). Gardner, while writing about a psychiatric examination conducted by Dr. James H. Huddleson, in October, 1934, on Hauptman at the request of one of his attorneys, James Fawcett states: "Hauptmann told them early on that in childhood he often added an e to words at the end. Even today, he said, "if I don't think on it, I do it." (Gardner 2004:194). Commenting on the same issue Fisher (2000) writes that Dr. Huddleson at that time handed Hauptmann's defense a report depicting "a childhood defect and related writing tic" that provides proof, that Hauptmann was the ransom-notes writer (Fisher 2000:158). Fisher posits that due to this condition, known as agraphia, Hauptmann would unconsciously, at times add an e onto words he otherwise knew how to spell (Fisher 2000:159). The author of the Lindbergh ransom notes, envelopes, and the writing on the package containing the baby's suit, placed an inappropriate e, twenty six times at the end of nine different words. Considering this evidence the only person could have only been, Bruno Hauptmann. Conclusion After reviewing Gardner's book on the Lindbergh-baby kidnapping case, it is apparent that Gardner's contentions on the improprieties of the police investigation and the evidence against Hauptmann are groundless. Reaching this conclusion is effortless when an unbiased person, objectively considers some of the indisputable facts of this case, the homemade ladder found near the scene of the crime thought to be used in the kidnapping was actually made by Hauptmann; part of the ransom money was found in Hauptmann's possession; and the ransom notes were undeniably written by Hauptmann. Further more, even before he was apprehended, all the eyewitness accounts depicted someone who bore an uncanny resemblance to Hauptmann. The Lindbergh case was closed that February, 1935, when a jury found Hauptmann guilty of kidnapping and murdering the twenty-month-old son of Charles Lindbergh, Sr. ...read more.

A very good essay. Reference could also be made to hoaxes during the investigation (e.g. Gatson Means).