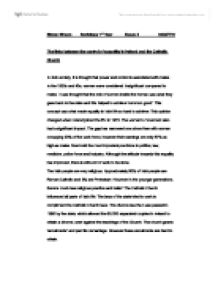 The links between the control of sexuality in Ireland and the Catholic Church In Irish society, it is thought that power and control is associated with males. In the 1930s and 40s, wom

Simon Kirwan Sociology 1st Year Essay 2 04387716 The links between the control of sexuality in Ireland and the Catholic Church In Irish society, it is thought that power and control is associated with males. In the 1930s and 40s, women were considered insignificant compared to males. It was thought that the role of women inside the homes was what they gave back to the state and this helped to achieve 'common good'. This concept was what made equality in Irish life so hard to achieve. This opinion changed when Ireland joined the EU in 1973. The women's movement also had a significant impact. The gap has narrowed now since then with women occupying 30% of the work force, however their earnings are only 67% as high as males. Men hold the most important positions in politics, law, medicine, police force and industry. Although the attitude towards this equality has improved, there is still a lot of work to be done. The Irish people are very religious. Approximately 90% of Irish people are Roman Catholic and 3% are Protestant. However in the younger generations, there is much less religious practice and belief. The Catholic Church influenced all parts of Irish life. The laws of the state tried to work to compliment the Catholic Church laws. ...read more.

In 1933 the Vatican asked the Irish government to make a protest to the League of Nations against the use of birth control (eg. The contraceptive pill). They agreed with the request. (5. Keogh, 1995, p.109) The Criminal Law Act of 1935 banned importing and selling birth control devices. This affected poor women and women in poor health the most. The Catholic Church had great strength and success in its control over sex and sexuality. That power has roots that lie in the role played by the Church's teachings on sexuality in the development of capitalism in Ireland. Colonialism made it illegal that Catholics attend or celebrate mass because of penal laws made in Britain in mid 17th century. In the second half of the 18th century the British government decided to change tactics and to try to build an alliance with the Catholic bishops. They made Maynooth College a seminary for Catholic Priests. This alliance did not work. After the Great Famine of the 1840s the Catholic Church became the new Irish ruling class. This was due to the amount of the rural poor who died or emigrated. Their land was taken over by tenant farmers. This role first gave the Catholic Church's view of sexuality the kind of power it has traditionally had in Ireland. ...read more.

As women started to go out to work, they changed their attitude to things. That meant a different attitude to sexual matters, more equal marriage relationships and a completely different view of sex outside marriage. As early as 1979, surveys found that 75% of married couples used a form of contraception not approved of by the Catholic Church at some time in their marriage. The average family size has halved over a single generation. Women are no longer being forced into marriage because they find themselves pregnant, the number of weddings of teenagers due to having babies has fallen from 2,400 in 1971 to 600 in 1991. Despite the ban on abortion, Irish women in their early 20s are as likely to have an abortion as women in Britain. Single women who decide to continue their pregnancies usually chose to bring the child up themselves instead of going for adoption. The Church has tried to fight back. The abortion referendum of 1983 gave women equal status under the constitution if they were pregnant. In the divorce referendum of 1987, 60% of voters wanted to keep the ban on divorce. This shows us that the Church still has power. However the law on divorce has now been passed so maybe we are heading for a future which would allow abortion in Ireland and see the decrease in influence of the control of sexuality by the Catholic Church in society. ...read more.