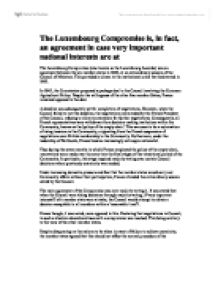 The Luxembourg Compromise is, in fact, an agreement in case very important national interests are at

The Luxembourg Compromise is, in fact, an agreement in case very important national interests are at The Luxembourg Compromise (also known as the Luxembourg Accords) was an agreement between the six member states in 1966, at an extraordinary session of the Council of Ministers. This provided a climax to the institutional crisis that had started in 1965. In 1965, the Commission proposed a package deal to the Council involving the Common Agricultural Policy. Despite the willingness of the other five member States, France remained opposed to the deal. A deadline was subsequently set for completion of negotiations. However, when the Council failed to met the deadline, the negotiations were ended by the French President of the Council, refusing to allow an extension for further negotiations. Consequently, all French representatives were withdrawn from decision-making institutions within the Community, known as the 'policy of the empty chair'. This was seen to be a culmination of rising tensions in the Community, originating from the French suspension of negotiations over British membership to the Community. Furthermore, under the leadership of De Gaulle, France became increasingly anti-supra nationalist. Thus during the seven months in which France employed the policy of the empty chair, reservations were made over the entry into the final stages of the transitional period of the Community. In particular, this stage required majority voting over certain Council decisions where previously unanimity was needed. ...read more.

Although the Council stipulated that decisions were to made within a reasonable time limit where unanimity was not reached, what this actually constituted was not defined. However through Council practice this has seen to be an adjournment of the session to the next meeting of the Council8. Where in the time between the sessions there will be informal meetings and much work done within COREPER to try and reach a compromise. The Luxembourg Compromise will be overlooked where other interests are deemed to take priority. Such interests are likely to involve the objectives of the Community. This was seen in the British invocation in 1982, for if the Council was seen to yield to such pressure this would have set a precedent for the other Member States where Community affairs were to their dislike. Moreover, it would have seriously undermined the independence and integrity of the Council and therefore the Community. The Council has further asserted its independence though through resisting to change any key elements of the proposals already passed, despite pressure from the Member States. Thus restricting the scope of the veto to the decision-making process. Although the European Court of Justice has yet to comment on the Luxembourg Compromise, from case law it maybe deduced that the Court is likely to overrule the veto. In Einfuhr-und Vorratsstelle fur Getreide und Futtermittel v Koster9, it was held that the balance of the institutions must not be disturbed, the veto though is seen to increase the power of the Council over the other institutions. ...read more.

It has developed from being 'an agreement to disagree' to a rule of procedure in the event of vital national interests being at stake concerning the matter in question. Practice though has shown such vital national interests to often involve benefits to farmers which may not actually benefit the country as a whole. This though should be available at all levels of the Council in order to increase productivity, through ease of passage at the ministerial level, despite the fears of inadequate accountability. Unanimity does have advantages though, in regard to the proceedings of the Community. For where the decisions are reached through unanimity the decision is seen to be of greater significance. Consequently, the member State is likely to find the decision more acceptable and translate it into national law with greater haste. With the possible enlargement of the Community in the future, unanimity will be even harder to achieve with such divergence of views. The Luxembourg Compromise though is likely to remain due to reluctance on the part of the Member States to reduce protection of their interests. The Community has been seen to acquiesce to this view, for in the Treaty on European Union, there were no new provisions effecting the use of the veto, despite the calls to extend majority voting. Thus the Luxembourg Compromise is likely to continue to effect Community matters but to a lesser extent with Member States now being seen as more flexible and willing to compromise. This is due to the recognition of the benefits of the Community and especially the internal market. ...read more.