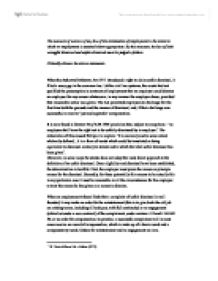 The measure of success of any law of the termination of employment is the extent to which re-employment is attained where appropriate. By this measure, the law of both wrongful dismissal and unfair dismissal must be judged a failure. Discuss.

The measure of success of any law of the termination of employment is the extent to which re-employment is attained where appropriate. By this measure, the law of both wrongful dismissal and unfair dismissal must be judged a failure. Critically discuss the above statements. When the Industrial Relations Act 1971 introduced a right to claim unfair dismissal, it filled a sorry gap in the common law. Unlike civil law systems, the courts had not qualified the presumption in contracts of employment that an employer could dismiss an employee for any reason whatsoever, in any manner the employer chose, provided that reasonable notice was given. The Act permitted employees to challenge for the first time both the grounds and the manner of dismissal, and, if their challenge was successful, to receive 'just and equitable' compensation. It is now found in Section 94 of EAR 1996 proclaims that, subject to exceptions - 'an employee shall have the right not to be unfairly dismissed by is employer'. The elaboration of this caused Phillips J to explain: 'It is narrowly and to some extent arbitrarily defined...it is a form of words which could be translated as being equivalent to dismissal contrary to statute and to which the label unfair dismissal has been given1. Moreover, in some ways the statute does not adopt the most direct approach to the definition of an unfair dismissal. Once eligibility and dismissal have been established, the determination is twofold. First, the employer must prove the reason or principle reason for the dismissal. Secondly, for these potentially fair reasons to be actually fair in any particular case it must be reasonable in all the circumstances for the employer to treat the reason he has given as a reason to dismiss. When an employment tribunal finds that a complaint of unfair dismissal is well founded, it may make an order for the reinstatement (this is to give back the old job on existing terms, including all back pay, with full continuity) ...read more.

There have been a number of criticisms of ACAS and the tribunal system in the context of the low level of re-employment following unfair dismissal claims. The most comprehensive analysis of the issue was that carried out by Dickens et al.,27who demonstrated that there did appear to be a higher level of desire among applicants for reinstatement than was borne out by the percentage of applicants who were actually reinstated. They also demonstrated that the proportion of conciliated settlements that involve reinstatement has declined. The study also revealed that over a quarter of employers who made a settlement did so because they admitted that they had not followed the correct procedure, and there are strong arguments that there should be more orders of reinstatement or re-engagement. Nevertheless, if the law provides for reinstatement, why is the level of reinstatement and re-engagement so low unless the tribunals and others in the system are failing to take it seriously enough, or the law is not strong enough? To some extent the nature of the problem was acknowledge in paragraph 3(4) of the Fairness at work White Paper28. This expressed the hope 'that the voluntary arbitration alternative provided by ACAS will create a change of culture so that individuals who have been dismissed unfairly are more likely to get their jobs back'. (The case of Wood Group Heavy Industrial Turbines Ltd v Crossan (1998)29, provides a salutary reminder of the vital role that the EAT can play in either promoting or inhibiting re-employment.) The key issue in relation to bringing about re-employment, it is suggested that it is one of speed and time. The quicker an application comes before the tribunal or other ad judicatory body, the easier it will be for an employee to be re-employed. In another word, the quicker the application is determined the less likely it its that the employee will be looking for alternative work; the less the employee's skills and job familiarity will have diminished; and the less likely it is that the employer will have replaced the dismissed employee. ...read more.

Yet, once it is recognized that respect for contractual dismissal procedures is difficult to reconcile with a rule limiting damages to the notice period, it is hard to see why these damages should simply reflect the length of time it would take to go through that procedure. Rather, it seems that the court should go on to access the likelihood that, had the procedure been followed, the employee would not have been dismissed. For the exercise is no longer one of treating an employee as being legally vulnerable to dismissal on notice at any time; instead, it involves giving effect to the reasonable expectations of the employee in the circumstances of the particular dismissal. There is no reason why here, the courts cannot assess the value of the lost chance, an exercise that is often conducted in unfair dismissal cases. It is hard to assess what effect higher levels of contractual damages would have on restraining dismissals; but those who consider how much workplace practice has altered because of personal injury litigation. Little has been said, though, of what to do for an employee who has actually been dismissed other than to give a right of action. From the discussion above, we can know that despite the statute's emphasis on re-employment as the remedy for unfair dismissed workers and the strengthening of this remedy in 1976, tribunals have always been reluctant to award it. The industrial tribunals pay a lot of attention to the employers' view regarding the acceptability and practicability of re-employment and rarely award the remedy in the face of employer opposition. However, from the employer's definition of success, which is whether the applicant on return would make a satisfactory employee and cause no managerial problems rather than considering the employee interests which might be served by re-employment, is what tribunals do tend to adopt. Therefore, I do not think that by looking only at the re-employment rate will conclude that the law of both wrongful dismissal and unfair dismissal is a failure. ...read more.