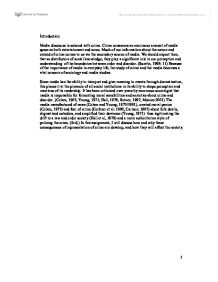 The media's perspective on crime and the resultant fear of crime.

Introduction: Media discourse is sutured with crime. Crime consumes an enormous amount of media space as both entertainment and news. Much of our information about the nature and extend of crime comes to us via the secondary source of media. We should expect then, that as distributors of social knowledge, they play a significant role in our perception and understanding of the boundaries between order and disorder. (Surette, 1998: 11) Because of the importance of media in everyday life, the study of crime and the media becomes a vital concern of sociology and media studies. Since media has the ability to interpret and give meaning to events through dramatization, this places it at the pinnacle of all social institutions in its ability to shape perception and reactions of its readership. It has been criticized over years by enormous sociologist that media is responsible for fomenting moral sensibilities and anxieties about crime and disorder. (Cohen, 1963; Young, 1971; Hall, 1978; Reiner, 1997; Munice:2001) The media manufactured of news (Cohen and Young, 1973/1981), created moral panics (Cohen, 1973) and fear of crime (Gerbner et al: 1980; Carlson: 1985) about folk devils, stigmatized outsiders, and amplified their deviance (Young, 1971) thus legitimating the drift to a law and order society (Hall et al, 1978) and a more authoritarian style of policing the crisis. (ibid.) In this assignment, I will discuss how and why these consequences of representation of crime are develop, and how they will affect the society. Fear of crime: In recent years policy debates have focused increasingly on fear of crime as an issue as serious s crime itself. As Home Office working party noted that 'fear of crime as an issue of social concern; it has to be taken as seriously as crime prevention and reduction'. (Home Office, 1989: ii) When the media representation of crime is compared to real world crime as measured by official crime statistics, it appears that the media images exaggerate the probability of danger. ...read more.

The first set of rules derives predominantly from the professional news imperatives and stresses the relevance of visible and spectacular violence. Its effect is that the violence most likely to receive coverage in the press that organized in acts involving sudden physical injury or apparently innocent strangers, especially in public places. The second set of informal rules stresses the relevancy of certain connotations surrounding the violent act. One of these is a sexual connotation which derives its prominence from the imperative of titillation. The third set of informal rules refers to the relevance of various moments in the process of violence, identifying the most significant moments as the acts and its effects rather than its casual context or motivation. Its effects can be portrayed by photographic victims; its meaning captured in a simple, graphic and immediate image. The forth set of rules is stressing the significance of those theories which attribute violence to individual pathology, parental failure, or the corrupting influence of undesirable media output rather than to social conditions. The fifth set of rules of relevancy refers to the salience of competing approaches to the prevention and treatments and parallels the attribution of violence to individual wickedness. It stresses the significance and deterrent value of repressive control rather than the appropriateness of large scale programs of social reform and reorganization. (Chibnall, 1977; 77-79) These informal rules are crucial in explaining the biased representation of crime towards violence, more importantly, these rules are crucial in explaining why media tend to undo the complexity of crime and support a more repressive social control. 3 The US sociologist Chermak's media contend analysis study indicate that police departments produce news media stories that are promotional, for example, important crime fighting activities, successful investigation and prosecuted cases to promote a favorable image of the police and legitimate their role in society. (Chermak, 1995) In the UK, Roshier's study has a similar result, he argue that the police provide solved crimes to media which lead to newspaper readers overestimate the proportion of crimes solved. ...read more.