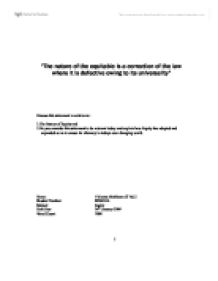 The nature of the equitable is a correction of the law where it is defective owing to its universality&quot;

The power of granting injunctions and appointing receivers. 8. The rules relating to the custody and education of infants. 9. The indulgence with which equity regarded the unpunctual compliance with stipulations not of the essence of contracts. The emergence of equity as an independent, systemised body of law meant that for the time it could actually challenge the operation of the common law. Nevertheless, despite fears expressed by many common law judges, it was very unlikely that equity would ever threaten the operation of the common law; the whole purpose of equity was to work with the common law in order to achieve a more universalised justice. Equity was dependent upon common law and was not set up to overwhelm it. As Maitland notes, equity was never self-sufficient; at every point it 'presumed the existence of the common law'.38 If the common law was abolished or destroyed, equity could no longer operate as a correction of the existing law; it would have no foundation. Considered in this light, the possibility of a conflict was improbable. This did not prevent the development of widespread fear and uncertainty about the exact character of the relationship between the common law and equity. This was one of the primary incentives for the introduction of the Judicature system in 1873. THE JUDICATURE ACTS 1873 AND 1875 The two courts had become " not rivals but partners in the work of administering justice"39 the time had come for the fusion of these jurisdictions into a single Supreme Court. Some limited steps were taken towards this fusion in the middle of the nineteenth century. The Common Law Procedure Act 1854 gave to the common law courts a certain power to give equitable remedies, and the Chancery Amendment Act 1858, commonly known as the Lord Cairns' Act, gave to the Court of Chancery power to award damages in addition to, or in substitution for, an injunction or a decree of specific performance. ...read more.

' It would be plainly inequitable for the ward now to deny that she has a right to live in this house and it seems to me that she has an equity which entitles her to stay in this house rent free for as long as she wishes to which the court must give effect.'73 While the result achieved was clearly an equitable and fair one in the circumstances, there are a number of difficulties with the reasoning employed by Costello J such as that he appears to hold that promissory estoppel is capable of creating proprietary rights. Also Costelloj's treatment of the concept of detriment in that he appeared to treat it as one of the requirements of promissory estoppel. While detriment is undoubtedly a requirement in establishing proprietary estoppel, there is a conflicting authority on the question of the need to establish it in cases of promissory estoppel. On the facts in front of the case in front of him. Costello J appears to accept that the respondent had acted to her detriment although it could be said that he was prepared to assume its existence as no reference was made to the respondent's circumstances before she moved in with the ward.74 This case is a prime example of how the judges have the power to expand the standing of the current law to provide an equitable relief. CONCLUSION "The nature of the equitable is a correction of the law where it is defective owing to its universality". As has been shown through the history of equity, this branch of law was established to provide relief when the common law failed in doing so. Equity has had a long and ever changing history but the main theme running through all the developments is to provide fairness. Even in todays busy society the theme is still the same. It would appear that Aristotle's statement is still extremley relevant today. Equity appears to easily adapt and expand in response to the changing demands of todays world and seems it shall continue to follow this path. ...read more.