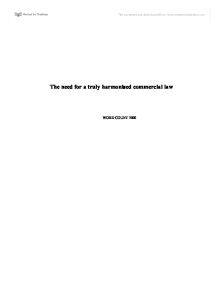 The need for a truly harmonised commercial law

In addition, harmonised law is very likely to be a contributing factor in protecting fledgling parties from falling prey to Opportunism and hostility of some practitioners, thanks to the high level of certainty and clarity provided by harmonised law. 5. Conclusion This essay has briefly shown the feasible advantages and disadvantages of harmonisation of commercial law with a brief overview of ''harmonisation'' definition and instruments . To sum up briefly, The urgency of harmonisation is evident in reducing a considerable number of inherent risks vis-a-vis international trade which emerged in parallel with the Buoyancy of international trade . In addition, harmonisation of law is almost certain to be a key factor in filling the existent legal vacuum through producing a significant proportion of neutral, compatible and tailor-made commercial law. Yet, the Criticisms raised above may denote that the harmonisation of law is no absolute virtue. There are Many factors that ought to be taken into consideration when harmonised law is produces ,ratified and applied. ...read more.