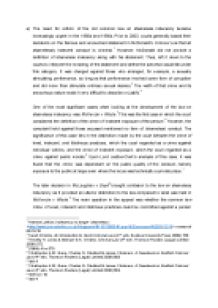 The need for reform of the old common law on shameless indecency became increasingly urgent in the 1980s and 1990s.

Transfer-Encoding: chunked ﻿1. The need for reform of the old common law on shameless indecency became increasingly urgent in the 1980s and 1990s. Prior to 2003, courts generally based their decisions on the famous and unvouched statement in McDonald?s Criminal Law that all shamelessly indecent conduct is criminal.[1] However, McDonald did not provide a definition of shameless indecency along with his statement. Thus, left it down to the courts to interpret the meaning of the statement and define the acts that would fall under this category. It was charged against those who arranged, for example, a sexually stimulating performance, so long as that performance involved some form of corruption and did more than stimulate ordinary sexual desires.[2] The width of that crime and its amorphous nature made it very difficult to describe or justify.[3] One of the most significant cases when looking at the development of the law on shameless indecency was McKenzie v Whyte.[4] This was the first case in which the court considered the definition of the crime of ?indecent exposure of the person?.[5] However, the complaint held against those accused mentioned no form of ?shameless? conduct. The significance of this case lies in the distinction made by the court between the crime of lewd, indecent, and libidinous practices, which the court regarded as a crime against individual victims, and the crime of indecent ...read more.

It was held by the court that if the acts committed by the accused were done deliberately then he was to be guilty and there was no need to prove whether his acts were shamelessly indecent. Victims of sexual harassment often state that they have felt invaded and thus violated.[26] Thus, the victims have experienced an unwelcomed intrusion upon their physical and or emotional private space.[27]In conclusion, the courts intruded on adult private lives where shameless indecency was charged in respect of consensual acts committed in private circumstances, which the Crown alleged to be offensive by reason of the relationship between the participants.[28]Since the sex act is deemed a personal and private matter between partners, it is not for public scrutiny.[29] The concept of indecent and obscene publications or voyeurism also represents a breach of privacy. The decision in Watt v Annan[30], which was based on McLaughlan[31], held that any form of conduct could be shamelessly indecent, depending on the nature of the conduct, the circumstances in which it took place and the necessary criminal intent. An example of this decision put in practice can be seen in the case of Robertson v Smith.[32] This case involved the accused who had exposed for sale indecent and obscene books and magazines as well as films and playing cards. ...read more.