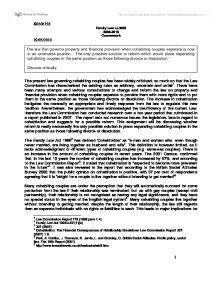 The present law governing cohabiting couples has been widely criticized; so much so that the Law Commission has characterised the existing rules as arbitrary, uncertain and unfair[1]. There have been many attempts and various consultations to change and r

The present law governing cohabiting couples has been widely criticized; so much so that the Law Commission has characterised the existing rules as arbitrary, uncertain and unfair1. There have been many attempts and various consultations to change and reform the law on property and financial provision when cohabiting couples separate to provide them with more rights and to put them in the same position as those following divorce or dissolution. The increase in cohabitation instigates the necessity an appropriate and timely response from the law to regulate this new tradition. Nevertheless, the government has acknowledged the insufficiency of the current Law; therefore the Law Commission has conducted research over a two year period that culminated in a report published in 2007. The report sets out numerous issues the legislators face in regard to cohabitation and suggests for a possible reform. This assignment will be discussing whether reform is really necessarily the only possible solution in place separating cohabiting couples in the same position as those following divorce or dissolution. The Family Law Act 19962 has defined 'Cohabitation' as "a man and woman who, even though never married, are living together as husband and wife". This definition is however limited, as it lacks acknowledgment of different types of cohabiting couples (e.g. same-sex couples). There is an increase in the amount of cohabiting couples in recent years. The 2001 Census, confirmed that, in the last 10 years the number of cohabiting couples has increased by 67%, and according to the Law Commission Report3, it stated that cohabitation is "expected to become more prevalent in the future"4. ...read more.

There are also other reasons why the Government, through public statements and policies, seek to encourage marriage and civil partnership. A former President of the Family Division, Sir George baker has argued that marriage provides the 'building blocks' of society and is 'essential to the will-being of our society' as we understand it21. Nevertheless, Lord Hoffmann has declared that it would be discriminatory to assume a particular unmarried couple could never be as good as married couple22. Another state benefit is that by managing the start of a relationship the state is able to regulate the relationship if it breaks. The state may wish to ensure that at the end of a relationship the arrangements for children will promote the child's welfare, and that the spouse's or civil partner's property is divided between them in a way that is just and fair. However, this does not apply to cohabiting couples as the court may well not be involved at the end of the relationship, unless there is a dispute, and only then will the court intervene23. On the question of whether there should be reform at all, there are a wide range of different views. It is clearly not possible to achieve anything approaching a consensus, and there are many who oppose any reform in this area as a matter of principle. However, recent research conducted by the British Social Attitudes survey24 indicates that a substantial majority of people think cohabitants should have access to financial remedies on relationship breakdown25. ...read more.

In New Zealand, the Civil Union Act has been in place since 2004 and this provides certain rights and obligations to cohabitants. The French government in 1999 introduced the pacte civil de solidarite (PACS) which has proved to be a popular substitute to marriage for cohabitating couples. It contains fewer rights, imposes less responsibility than marriage and has become socially acceptable in France33. In essence, France arguably has the most development of the civil union concept. In conclusion, it is important to note that any reform should be set at a lower threshold regarding rights and obligations than that of marriage and the ancillary relief upon divorce. Despite the decrease in marriage rates, it is still considered as the traditional form of union in this country. The societal reasons for declining to align cohabitation with marriage are influential but the legal ones are significant too, as there is not a present need to create a replacement to marriage. The role of marriage should be preserved in society, especially that, reports have concluded that marriage is better for individuals and society. After the new Scottish legislation has been scrutinised by the Government, it is anticipated that a Bill will be introduced. On the whole in my opinion, the fact that the parties have not entered into the commitment of marriage should be respected by the law, and they should expect a lower level of jurisdiction by the court and State. ...read more.