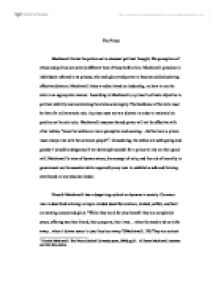 Machiavelli broke the pattern set in classical political thought; His perception of ethics and politics are severly different than of those before him. Machiavelli preaches to individuals referred to as princes, who seek glory and power to become cold calculating effective dictators. Machiavelli takes a radical stand on leadership, on how to run the state in an appropriate manner. According to Machiavelli, a prince’s ultimate objective is political stability and maintaining the states sovereignty. The backbone of the state must be that of a military style rule. A prince must act as a dictator in order to maintain his position as the sole ruler. Machiavelli assumes shared power will not be effective with other nobles, “since the nobles are more perceptive and cunning….furthermore a prince must always live with the common people"[1]. Considering, the nobles are unforgiving and greedy it would be dangerous if not downright suicidal for a prince to rely on their good will. Machiavelli’s view of human nature, his concept of virtu, and the role of morality in government are the essential skills required by any ruler to establish a safe and thriving state based on one absolute leader.

Niccolò Machiavelli has a despairing outlook on humans in society. Common man is described as being a simple-minded deceitful creature, wicked, selfish, and bent on wanting money and glory. "While they work for your benefit they are completely yours, offering you their blood, their property, their lives… when the need to do so is far away…when it draws nearer to you they turn away.”(Machiavelli. 58) They are content and happy so as long as they are not victims of something terrible. They may be trustworthy in prosperous times, but they will quickly turn selfish, deceitful, and profit-driven in times of chaos and misery. Humans have no sense of loyalty and are only good useful creatures while under duress. Under these circumstances of duress, they can be manipulated and led to believe in other beliefs. This illustrates Machiavelli’s view of human nature as being one of a changeable source.

A prince must posses virtu, meaning being physically strong, intelligent, courageous, and compassionate. Most importantly, every action the prince undertakes must be first considered on how it will be affect the state. While a prince’s image must be that of a virtuous and good leader, beneath the surface he should not necessarily act that way. Through the use of propaganda a prince must convince his people to glorify him, thus diverting attention from his true actions. If a prince expresses the qualities of compassion and devotion too often, he will without doubt lose his grip on power as the public will see him as a weak insecure figure. A prince must be aware and cunning enough to use each virtu in the interests of the state depending on each specific situation. A prince has the right to lie and deceive the population because men “are a wicked lot and will not keep their promises to you, you likewise need not keep yours to them” (Machiavelli. 61)

Machiavelli said that a prince is able to learn to become even more virtuous by simply looking at the study of warfare, and how people are able to win battle through planning and strategy rather than by luck.

Machiavelli puts heavy emphasis that the sovereign must take whatever action is necessary to maintain order in society. To allow this to happen, a prince must put his moral values to a side and not hesitate to use violence if necessary. While, Machiavelli does not fundamentally promote or encourage violence and cruelty to a ruler’s own population, but sees it as necessary tool. Without fear, the trust of the people in their leader will disappear and others will start emerging to replace the current leadership which is deemed to be weak. Machiavelli argues that it is better for a prince to be severe when punishing people rather than merciful. Machiavelli prefers the option of being feared because “fear is sustained by a dread of punishment that will never leave you” (Machiavelli 58). However, a prince should avoid being hated, which he can easily accomplished by not confiscating the property of his subjects. The reason for this is humans are economically profit-driven and selfish and “would forget the death of their father more quickly than the loss of their patrimony” (Machiavelli 58)

Niccolo Machiavelli believes the state should be the primary focus of everyone in society and its survival an important concern to all its citizens. A prince must love his people, but willing to put aside moral beliefs in order to maintain rule from internal or external threats. Through the combination of compassion, fear and his personnel attributes of virtu a prince must do anything within his power to keep the influence and strength that he has attained.

[1] Niccolo Machiavelli. The Prince (Oxford University press, 2005) pg 35.  All future Machiavelli citations are from this source.