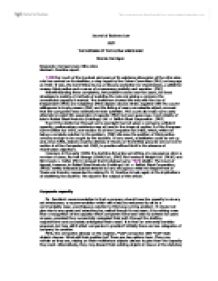 The reform of the ultra vires rule.

Journal of Business Law 1987 THE REFORM OF THE ULTRA VIRES RULE Brenda Hannigan. Keywords: Company law; Ultra vires Abstract: Prentice report. *173 For much of the hundred odd years of its existence discussion of the ultra vires rule has centred on its abolition, a step urged by the Cohen Committee [FN1] as long ago as 1945. It was, the Committee found, an illusory protection for shareholders, a pitfall for unwary third parties and a cause of unnecessary prolixity and vexation. [FN2] Notwithstanding these complaints, few problems arose over the years, for there developed a variety of methods of avoiding the rule and giving a company the unrestricted capacity it wanted. The draftsman showed the way with the use of independent [FN3] and subjective [FN4] objects clauses which, together with the courts' willingness to imply powers [FN5] and the listing of every conceivable object, ensured that few companies were restricted in their activities. The courts did make some early attempts to resist this expansion of capacity [FN6] but soon gave way, most notably of late in Rolled Steel Products (Holdings) Ltd. v. British Steel Corporation. [FN7] Even if the draftsman through some oversight had not given a company sufficient capacity, parliamentary assistance was at hand in the shape of section 9 of the European Communities Act 1972, now section 35 of the Companies Act 1985, which, while not being a complete solution to the problem, [FN8] did ease the position of third parties unlucky enough to be caught by the doctrine. In any event, subsidiaries could be set up and, since 1890, objects could be altered, in theory on the limited grounds set out now in section 4 of the Companies Act 1985, in practice without limit in the absence of shareholder objections. However, in the early 1980s the doctrine did enjoy something of a resurgence when a number of cases, Re Halt Garage (1964) ...read more.

Finally, given the ability to opt for restricted capacity, it is important to complete the reforms by implementing the Jenkins Committee [FN15] recommendation that a company should possess a general power of alteration of objects. Section 4 of the Companies Act 1985 should be amended accordingly. Limits of managerial authority Even if a third party is protected against a lack of capacity, problems may still arise of a lack of authority, usually on the part of an individual director. Here the company will seek to renege on a transaction on the basis that the agent in question had no authority to enter into the transaction on behalf of the company. If the aim of any reform is to provide security for third parties then this problem too must be considered. Here Dr. Prentice's proposals are as follows: 1. A company should be bound by the acts of its board of directors or of an individual director. 2. Third parties would be under no obligation to determine the scope of the board or director's authority or to determine the contents of the company's memorandum or articles. A third party would not be affected by notice of the contents of the company's memorandum or articles of association. [FN16] 3. Only if a third party had actual knowledge, as defined above, that the board or individual director lacked authority would the transaction be unenforceable by that third party, although the company would be free to ratify it by ordinary resolution. 4. If the third party is an officer or director of the company, then constructive knowledge, as defined above, would be sufficient to *177 render the transaction unenforceable against the company but the company would remain free to ratify it. It has been suggested that this proposal goes too far and will leave the company and its shareholders at the mercy of miscreant directors. [FN17] But does it really extend the existing law that far? ...read more.