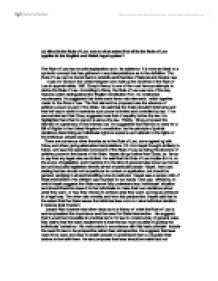 The Rule of Law

(a) What is the Rule of Law and to what extent if at all is the Rule of Law applied in the English and Welsh legal system? The Rule of Law has no solid explanation as to its existence. It is more an ideal or a symbolic concept that has gathered many interpretations as to the definition. The Rule of Law can be traced back to Aristotle and theories of Natural and Devine Law. It was AV Dicey in the United Kingdom who built up the Doctrine of the Rule of Law in approximately 1895. Dicey's theory is one of the most famous attempts to define the Rule of Law. According to Dicey, the Rule of Law was one of the key features which distinguished the English constitution from its continental counterparts. He suggested that there were three main elements which together made for the Rule of Law. The first element he proposed was the absence of arbitrary power on part of the State. He said that the State shouldn't intervene and that the way in which it exercises such power is limited and controlled by law. The second element that Dicey suggested was that of equality before the law. He highlighted here that no person is above the law. Thirdly, Dicey proposed the element of supremacy of the ordinary law. He suggested that there is no need for a Bill of Rights in the United Kingdom's constitution, as the principle of judicial decisions determining an individuals rights is supreme as it attends to the rights of the individual, private person. ...read more.

Also, some politicians can't get sued for slander in parliament, indicating that they are also above the law. More low key, is the observation of the different treatment some celebrities may receive above other civilians. It has been evident in past situations that some may have escaped the clasps of the law in circumstances where other non-celebrities would not have. The supremacy of the ordinary law has also come under fire as to whether this concept exists today in our legal system. The relationship between the courts and government, and the conflict that exists between the two, has lead to some discussion as to whether the ordinary law and judicial decisions are supreme. Also, the relationship between the United Kingdom and Europe has lead to observation of the supreme power the EU now has over our government. A major component of this influence is the Human Rights Act 1998. The influence of Europe has limited the country's parliamentary sovereignty and this in itself questions how supreme ordinary law now is. When looking at the theory of Joseph Raz, it is clear that some of his presumptions as to the Rule of Law do not apply to the English and Welsh legal system today. When considering his theory that law should be prospective as oppose to retrospective, it is clear that is not always so. ...read more.

This therefore means that they do not enjoy due process. Although the Human Rights if the young have been improved by the introduction of the Children Act 1989 a, the signing of the UN convention on the Rights of a Child and the Human Rights Act 1998, those in position of authority have immense power over them economically and emotionally . They are able if they choose to virtually strip them of their rights. This therefore concludes that children do not always enjoy due process. Although it is held by most that the United Kingdom is still governed under the Rule of Law, and it is believed by many to be the foundations of our legal system, it is clear that today, the Rule of Law remains an ideal and has no solid definition on which to base it. With numerous interpretations of what it really is, and the ways in which our legal system does not always abide by the main principles of the Rule of Law such as 'no-one is above the law', it is reasonable to question whether the Rule of Law does actually exist in the English and Welsh legal system. The way in which due process, which is supposed to uphold law and order and uphold the position of society and the ideal of justice, does not allow all people to enjoy it and many may be deprived in this area, is an addition to the argument that the Rule of Law does not exist and that the idea and numerous interpretations of it are merely symbolic. ...read more.