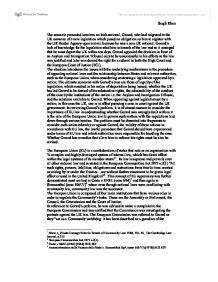 The scenario presented involves an Irish national, Gerard, who had migrated to the UK unaware of a new legislation which posed an obligation on him to register with the UK Border Agency upon arrival, because he was a non-UK national. Gerard appealed the d

The scenario presented involves an Irish national, Gerard, who had migrated to the UK unaware of a new legislation which posed an obligation on him to register with the UK Border Agency upon arrival, because he was a non-UK national. Gerard's lack of knowledge for the legislation sited him in breach of the law and so it emerged that he must depart the UK within ten days. Gerard appealed the decision in front of an Asylum and Immigration Tribunal only to be unsuccessful in his efforts as the law was justified and later was denied the right for a referral to both the High Court and the European Court of Justice (ECJ). The situation introduces the issues with the underlying mechanisms in the procedure of appealing national laws and the relationship between States and relevant authorities, such as the European Union, when considering contesting a legislation approved by a nation. The ultimate concerns with Gerard's case are those of legality of the legislation, which resulted in his notice of deportation being issued, whether the UK has led Gerard to be denied of his substantive rights, the admissibility of the conduct of the case by the institutions of the nation i.e. the Asylum and Immigration Tribunal, and the solutions available to Gerard. When appealing against legislation set by a nation, in this case the UK, one is in effect pursuing a case in court against the UK government. In reviewing Gerard's problem, it is of utmost essence to consider the importance of EU law in understanding whether Gerard was ...read more.

"Court of Justice finds that the Member State concerned has not complied with its judgement, it may impose a lump sum or penalty payment on it"16. It must be re iterated that the size and nature of the penalty is at the Court's discretion due to the nature of the supremacy of EC law. Fines can incur as an annual payment such as in Commission v Spain (case C-92/96)17or imposition of a daily fine multiplied by the number of days the infringement continued. As implied previously, the Commission's action against the Member State does "not provide redress to individuals"18 and it is the individuals role to retrieve this from the national institutions and their unions. Gerard's matter soon came before the Asylum and Immigration Tribunal which is the national authority before which such matters of deportation appeals take place. In the tribunal it was argued that the law was justified on the basis of public security and this argument was accepted by the tribunal and Gerard was refused any further referrals to the High Court and the ECJ. However, the outcome of the tribunal did not provide full justice to Gerard and was not in conformity with EC law practices. Article 39 (3) EC provides that the right to prevent movement of persons within the Community can be restricted "on grounds of public policy, public security or public health"19. These grounds can only be utilised as a defence if the threat is serious and sufficient enough as seen in Rutlili v Minister for the Interior (case 36/75)20. ...read more.

It can be gathered that Gerard became a victim of an unjust law and was then victimised further with the erroneous demeanour of the national courts and tribunals. Gerard's solution lies within the EU law as the supremacy of its Treaties overrules the national law of Member States. It is duty of the relevant institution of the EC, the European Commission, to investigate whether a breach has taken place and on what grounds can charges be placed on the Member State. However, it is essential to note that the Commission cannot be compelled to take action to provide a form of redress for Gerard, but to enlighten the importance of adhering to EU law and to explain why a breach was created. National procedural autonomy must be considered to understand that legal systems of the Member States are independent of the ECJ and the ECJ does not have the right to interfere with the procedures of this unless the appeal presented to a court or tribunal concerns Community law. In this instance, reference, for clarity, must be made to the ECJ, either by the tribunal or the Supreme Court that the case has been transferred to. Under EU law, remedies for a breach of Community can be applied only if the breach is 'sufficiently serious'; if so, then a remedy of state liability is owed. Gerard cannot specifically claim damages for the tribunals failure to refer but is able to claim damages against breaches made by the national law of the Member State in incorrectly applying Community law and not referring to it. ...read more.