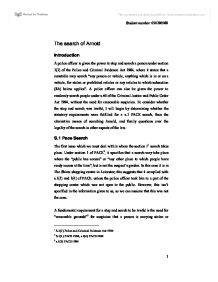 The search of Arnold - Police stop and search powers.

The search of Arnold Introduction A police officer is given the power to stop and search a person under section 1(2) of the Police and Criminal Evidence Act 1984, where it states that a constable may search "any person or vehicle, anything which is in or on a vehicle, for stolen or prohibited articles or any articles to which subsection (8A) below applies". A police officer can also be given the power to randomly search people under s.60 of the Criminal Justice and Public Order Act 1994, without the need for reasonable suspicion. To consider whether the stop and search was lawful, I will begin by determining whether the statutory requirements were fulfilled for a s.1 PACE search, then the alternative means of searching Arnold, and finally questions over the legality of the search in other aspects of the law. S.1 Pace Search The first issue which we must deal with is where the section 11 search takes place. Under section 1 of PACE2, it specifies that a search may take place where the "public has access" or "any other place to which people have ready access at the time", but is not the suspect's garden. In this case it is in The Shires shopping centre in Leicester; this suggests that it complied with s.1(1) ...read more.

If, however, Arnold's behaviour appeared to be suspicious, then it would not be so straightforward deciding whether it would render the stop and search illegal, due to conflicting case law over the thresholds of suspicion, and the wide "penumbra of uncertainty" of reasonable suspicion. The officer must be searching for particular objects: stolen or prohibited articles16. In this case, the officer seems to be searching for stolen items, as he suspects Arnold of shoplifting, although he doesn't directly say what it is he is searching for. The officer can only ask for an outer coat, jacket, or gloves to be removed17, although pockets can be searched if it is related to an offence where the item could be slipped into the pocket, but the search cannot go any further than that18. In Arnold's case, the constable searches his pockets but nothing more, which, assuming he has reasonable suspicion, is following the provisions in PACE. The policeman is also required to follow some identification requirements when he stops and searches a person19. He should give his name and police station, the object of the search, his grounds for it, and the suspect's entitlement to a copy of the search record20. These identification requirements were not followed in our example, as the officer simply says "in that case, you won't mind me checking what you have in your pockets". ...read more.

Learned academics, such as Quincy Whitaker28 agree that if a stop and search is speedy, such as that of a roadside search, and doesn't involve long periods of detention, human rights issues are not raised. Conclusion It is highly unlikely that this stop and search was a random authorised search under s.60 of the Criminal Justice and Public Order Act 1994; there is no evidence to suggest this in the problem, therefore I will not dwell on this point. It is much more likely that the search was in fact a search under s.1 of PACE. The statutory requirements for this do not seem to have been followed given the information which has been presented; there doesn't seem to have been "reasonable suspicion", and the recording and identification requirements were not fulfilled. Each of these factors could well lead to the stop and search being declared unlawful. The matters of consent searches and human rights issues are easily resolved; revisions to Pace Code A mean that consent is not enough to allow a search to take place; there must be a statutory basis for it to be lawful. It would most probably be seen that Arnold's human rights were not infringed, as he was not detained for a sufficiently long period of time. Therefore, it is more than likely that the constable's actions were not entirely legal, as he did not fulfil all of his statutory requirements set out in s.1 PACE. ...read more.

An excellent essay on PACE.