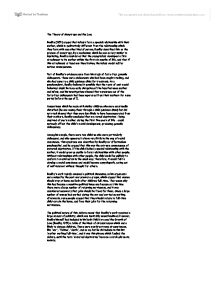 The Theory of Monotropy and the Law.

The Theory of Monotropy and the Law. Bowlby (1951) argued that infants form a special relationship with their mother, which is qualitatively different from the relationship which they form with any other kind of person. Bowlby described this as the process of monotropy. By a mechanism which he saw as very similar to imprinting, Bowlby considered that the young infant developed a firm attachment to its mother within the first six months of life, and that if this attachment or bond was then broken, the infant would suffer serious consequences. Part of Bowlby's evidence came from his study of forty-four juvenile delinquents. These were adolescents who had been caught stealing, and who had come to a child guidance clinic for treatment. As a psychoanalyst, Bowlby believed it possible that the roots of anti-social behaviour might lie in an early disruption of the bond between mother and infant, and his investigations showed that seventeen out of the forty-four delinquents had been separated from their mothers for some period before the age of 5. Comparisons which he made with similar children who were emotionally disturbed (he was seeing them through a child guidance clinic) but did not steal showed that they were less likely to have been separated from their mothers. Bowlby concluded that ma-ternal deprivation - being deprived of one's mother during the first five years of life - could seriously affect the child's social development, producing juvenile delinquency. ...read more.

There were, however, three major criticisms of the monotropy theory. The first of these was whether these consequences really arose from disruption of the mother-infant bond. Rutter (1981) showed that other factors were always involved as well, such as physical and emotional neglect in general, the lack of any positive relationships with others and/or the more general-ised deprivation resulting from institutional life. To attribute it strictly to disturbed mother-infant attachments was to go beyond the data. The second issue was whether such outcomes were permanent. Tizard and Hodges (1978) showed that late-adopted children could develop positive relationships with others despite early deprivation, and Clarke and Clarke (1976) presented a number of case studies showing how careful therapy could ameliorate the effects of even very severe privation. The third criticism was whether only the first few years of life mattered. As a psychoanalyst, Bowlby had assumed that these were the formative years of person-ality, and had therefore expected lasting effects from early deprivation. But Rutter (1979) showed that the delinquency attri-buted to early experience by Bowlby was more likely due to stress in the family home; and Power et al. (1974) showed that recidivism was linked to continually stressful home circumstances, whereas single offences were more closely associated with a period of temporary disturbance occurring in the family at that time. ...read more.

In such cases, always, it was the father who responded most sensitively to the child. Parke and O'Leary (1976) observed mothers and fathers in a maternity ward. What they found was that, contrary to the popular stereotypes, fathers tended to be very keen on interacting with their infants, and were neither inept or uninterested in what their newborn children were like. Instead, they were often as sensitive in interacting with their infants as the mothers were. Parke and Swain (1980) observed mothers and fathers each feeding their 3-month-old infants. They also found that the fathers responded just as sensitively to infant cues as the mothers did, responding in terms of both social interaction - conversational or gestural - and by adjusting the pace of feeding according to the signals being put out by the child. However, they did find that fathers tended to hand the responsibility for caretaking to their wives rather than adopting that responsibility themselves. The skills that fathers had in parenting became apparent only when they were asked to demonstrate how they would go about inter-acting with their children for the investigators: much of the time they did not seem to exercise these skills at home. In 1998 there were 40 thousand children under the age of five in families of couples that divorced. Children are sociable and not damaged by multiple attachments. There is no cogent reason the courts should not treat mothers and fathers the same in relation to the upbringing of their children. ...read more.