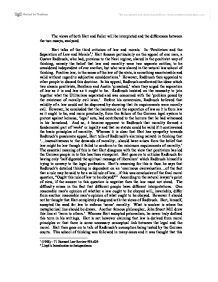 The views of both Hart and Fuller will be interpreted and the differences between the two essays, analysed.

The views of both Hart and Fuller will be interpreted and the differences between the two essays, analysed. Hart talks of the third criticism of law and morals. In 'Positivism and the Separation of Law and Morals1,' Hart focuses particularly on the appeal of one man, a Gustav Radbruch, who had, previous to the Nazi regime, shared in the positivist way of thinking, namely the belief that law and morality were two separate entities, to be considered independent of one another, but who now shared in the natural law school of thinking. Positive law, in the sense of the law of the state, is something ascertainable and valid without regard to subjective considerations.2 However, Radbruch then appealed to other people to discard this doctrine. In his appeal, Radbruch confronted the ideas which two classic positivists, Bentham and Austin 'preached,' when they urged the separation of law as it is and law as it ought to be. Radbruch insisted on the necessity to join together what the Utilitarians separated and was concerned with the 'problem posed by the existence of morally evil laws.' Before his conversion, Radbruch believed that validity of a law could not be disproved by showing that its requirements were morally evil. However, he concluded that the insistence on the separation of law as it is from law as it ought to be, and more practically, from the failure of the German legal system to protest against heinous, 'legal' acts, had contributed to the horrors that he had witnessed in his homeland. And so, it became apparent to Radbruch that morality formed a fundamental part of 'recht' or legality and that no statute could be valid if it contravened the basic principles of morality. ...read more.

Fuller obviously believes that had the judge in his example followed Hart's line of thinking, then he would be torn between his loyalty to the law and his moral beliefs. If the judge believes that many of the decisions taken by his superior court are 'wrong', and that they 'ought to be' different, then in following the positivistic thinking, he would have to apply them anyway, contrary to his moral beliefs. Fuller believes, unlike Hart, that Radbruch fully understood that he was faced with a moral dilemma. Having lived through the atrocities, Radbruch knew that the courts and he were faced with a moral dilemma. Where Hart and Fuller differed was how best to cope with a morally unjust law. Whereas Hart believed that it was a choice between two evils and, hence, a no win situation Fuller believes that the best outcome was to follow your principles and fail to recognise that such evil laws can, in fact, be legally binding. Another difference is that Hart failed to differentiate between 'order' and 'good order.' This 'good order' corresponds to morally just laws or men's notion of what 'ought to be.' Let us use abortion as an example to differentiate between the two schools of thinking. If the House of Lords acted in a retroactive manner and banned any pro-abortion laws because they regarded the removal of a foetus as the unlawful killing of a human being and therefore immoral, this would lead to women who underwent an abortion and the doctors that performed the operation being liable under criminal law. A large proportion of society would not be able to tolerate this. ...read more.

In resolving the 1968 case, the courts declared the National Socialist law was void as it ran 'contrary to fundamental principles of justice to such an evident and unbearable extent that the judge who applied them would be speaking wrong instead of right.9' So, the courts denied that the Nazi law had ever held validity, even though it had been in force for a number of years. If the positivist view had been taken, it would have been held that the law ought still to stand, as it was law, but that a retroactive law should be passed that would usurp this evil law. So, the end result would have been likely to be the same. In the second case, hereby referred to as GDR, it was determined that after the reunification, East German criminal law would preside over cases and was in accordance with the basic law. It concerned a defendant who claimed that in killing an individual trying to cross into Berlin, he was simply following Paragraph 27 section 2 of the GDR border law. The defendant claimed the courts were acting retroactively by ignoring the GDR law. The German Court ignored the GDR law, claiming that the crime 'violated elementary tenets of justice and fundamental Human Rights.10' The positivist would have claimed that it was not the East German that was immoral, but the legal system which created it. 1 (1958) - 71 Harvard Law Review 593-629 2 Lloyd's Introduction to Jurisprudence. 3 (1958) 71 Harvard Law Review 630-672 4 Hart - Positivism and the Separation of Law and Morals pg 33 5 Fuller (1958) 3 Natural L For 6 1 A.C. 599 7 Hart - The Concept of Law 8 Essays in Legal Philosophy (1968) 9 L Szekessy - Justice in Constitutional Courts 10 L Szekessy - Justice in Constitutional Courts ...read more.