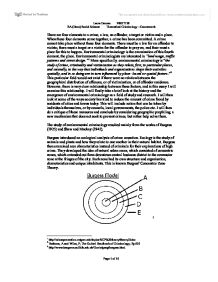 There are four elements to a crime, a law, an offender, a target or victim and a place. When these four elements come together, a crime has been committed.

There are four elements to a crime, a law, an offender, a target or victim and a place. When these four elements come together, a crime has been committed. A crime cannot take place without these four elements. There must be a law for an offender to violate; there must a target or a victim for the offender to prey on, and their must a place for this to happen. Environmental criminology is the examination of this fourth element, the place. Environmental criminologists are interested in "land usage, traffic patterns and street design."1 More specifically, environmental criminology is "the study of crime, criminality and victimisation as they relate, first, to particular places, and secondly, to the way that individuals and organisations shape their activities spatially, and in so doing are in turn influenced by place-based or spatial factors."2 This particular field would not exist if there were no relation between the geographical distribution of offences, or of victimisation, or of offender residence. However, there is very clear relationship between these factors, and in this essay I will examine this relationship. I will firstly take a brief look at the history and the emergence of environmental criminology as a field of study and research. I will then look at some of the ways society has tried to reduce the amount of crime faced by residents of cities and towns today. This will include action that can be taken by individuals themselves, or by councils, local governments, the police etc. I will then do a critique of these measures and conclude by considering geographic prophiling, a new mechanism that does not seek to prevent crimes, but rather help solve them. The study of environmental criminology resulted mainly from the works of Burgess (1925) and Shaw and Mackay (1942). Burgess introduced an ecological analysis of crime causation. Ecology is the study of animals and plants and how they relate to one another in their natural habitat. ...read more.

central city will be unsafe in differing degrees, and the ghetto slum neighbourhoods will be places of terror with widespread crime, perhaps entirely out of police control during night time hours. Armed guards will protect all public facilities such as schools, libraries and playgrounds in these areas." 9 The other problem facing target hardening is the erosion of public space. Public spaces could become less and less accessible as we try to strength ourselves against crime attacks. If everyone is taking the same steps to try and keep out possible perpetrators of crime, then we will also maybe shut out our neighbours. Unfortunately, it is likely that target hardening measures will only deter the opportunist thief. If someone is determined to get into your home, or car, and has cited it as a definite for their chosen crime, then they will more than likely succeed in their task. It also means that householders who cannot afford to take basic security measures such as improved locks on doors and windows are generally more likely to fall victim to burglary, e.g. people who are young, unemployed, single parents, those with low incomes or who live on council estates, The next method of crime prevention I will consider the problems of is Neighbourhood Watch. There was not a lot of criticism to be found on Neighbourhood Watch, however, most of the environmental approaches to crime prevention rely very much on the principle of informal social controls operating in cohesive communities and the idea that environmental design can help to encourage a sense of cohesion. This is the core idea behind neighbourhood watch. The main problem encountered with Neighbourhood Watch would therefore maybe seem to be in its implementation. As Murray (1995) points out, however, improved environmental and building design can enhance the quality of life in a community, but if there are elements within that community, which continue to contribute to a pattern of disorder, or there are serious rifts within a community, then no amount of environmental intervention will produce a reduction in crime. ...read more.

For example, Geographic Profiling could not work if it was not recognised that they have a "tendency to hunt in known areas, a desire to disguise the home location, quantifiable criteria for perceived distance to crime sites, and an identifiable set of characteristics relating the crimes to a single serial criminal." 19 Geographic Profiling also depends very heavily on crime sites belonging to the same series of crime, or the same offender and also on the knowledge of travelling distance in relation to particular types of crime. For example, a murderer or rapist is likely to travel further than a petty thief or vandal. Geographic Profiling, although not used to help prevent crimes, is a very useful tool when it comes to solving them, or filtering the evidence to help solve crimes. As can be seen, although all the crime prevention measures can go some way to helping, there is still a lot of ground to be covered. When we compare crime figures across cultures, in Japan the number of violent offences (wounding, common assault, robbery and snatch theft) reported to the police in 1999 was 43,000. In comparison to Britain, the number of crimes reported that were considered 'violent' stood at an astounding 3,246,000. Maybe there is only so much that environmental criminology can contribute when it seems that maybe the individualistic society we live in is simply more prone to crime in comparison to other, more collectivist, cultures. If this is the case, then Geographic Profiling is likely to be used more and more in the coming years. WORD COUNT - 5033 1 http://crimeprevention.rutgers.edu/topics/SCP%20theory/theory2.htm 2 Bottoms, A and Wiles, P; The Oxford Handbook of Criminology; Pg 620 3 http://www.kesgrave.suffolk.sch.uk/Curric/geog/burgess.html 4 http://www.homeoffice.gov.uk/rds/pdfs/hosb1800.pdf 5 http://www.met.police.uk/crimeprevention/neighbor.htm 6 http://www.crimewise.com/library/cpted.html 7 http://www.kalzip.co.uk/projects/slate.htm 8 http://www.kalzip.co.uk/projects/slate.htm 9 American Behavioural Scientist, Nov/Dec76, Vol. 20 Issue 2, p275, 14p 10 http://www.jcg.jersey.sch.uk/subjects/psychology/crime/crimenvironment.html 11 http://www.nacro.org.uk/ 12 Scotsman, Saturday 29th June, 2002; myscotsman.co.uk 13 http://www.nacro.org.uk 14 http://www.preventingcrime.org/report/chapter7_10.htm 15 http://www.nacro.org.uk 16 http://www.nacro.org.uk/data/briefings/ nacro-2002062800-csps.pdf 17 http://www.nacro.org.uk/data/briefings/ nacro-2002062800-csps.pdf 18 http://www.ecricanada.com/geopro/index.html 19 http://www.ecricanada.com/geopro/howdoesitwork.html Laura Duncan 98057758 BA (Hons) Social Science Theoretical Criminology - Coursework Page 1 of 10 ...read more.