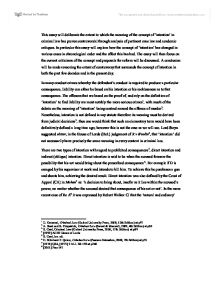 &quot;There is no statutory definition of intention in English law. Indeed, over the past few decades there has been much controversy over the actual meaning of the concept 'intention'&quot;. Explain and evaluate this statement.

This essay will deliberate the extent to which the meaning of the concept of 'intention' in criminal law has proven controversial through analysis of pertinent case law and academic critiques. In particular this essay will explore how the concept of 'intention' has changed in various cases in chronological order and the effect this has had. The essay will then focus on the current criticisms of the concept and proposals for reform will be discussed. A conclusion will be made reasoning the extent of controversy that surrounds the concept of intention in both the past few decades and in the present day. In many conduct crimes whereby the defendant's conduct is required to produce a particular consequence, liability can either be based on his intention or his recklessness as to that consequence. The offences that are based on the proof of, and rely on the definition of 'intention' to find liability are most notably the more serious crimes1, with much of the debate on the meaning of 'intention' being centred around the offence of murder2. Nonetheless, intention is not defined in any statute therefore its meaning must be derived from judicial decisions3, thus one would think that such an elementary term would have been definitively defined a long time ago; however this is not the case as we will see. ...read more.

A concrete block was dropped and the driver was killed. The trial judge directed the jury suggested in Maloney and they were convicted of murder but on appeal the HoL held that this had been incorrect and that a verdict of manslaughter should be imposed. Their Lordships were in accord with Lord Bridge that foresight of consequences was not in itself intention, but they were concerned the question of whether the death was a 'natural consequence' might suggest to juries that they need not consider the degree of probability. Lord Scarman suggested that the jury should be directed that 'the greater the probability of a consequence, the more likely it is that the consequence was foreseen and that if that consequence was foreseen the greater probability is that the consequence was also intended'. This ruling was pivotal in that it removed the ambiguous notion of 'natural consequence' and created a new scrutiny that considered the degree of probability of a consequence. This concept was further clarified in R v Nedrick18 where Lord Lane CJ stated that even if death or GBH is not the defendant's aim or wish, the jury may infer intention if they decide that death or GBH were virtually certain from the act, and that the defendant foresaw that was the case. ...read more.

An excellent essay, which shows a strong command of the subject matter in hand.