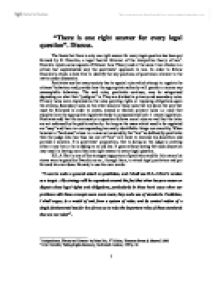 &quot;There is one right answer for every legal question&quot;. Discuss.

"There is one right answer for every legal question". Discuss. The thesis that there is only one right answer for every legal question has been put forward by R. Dworkin, a legal theorist follower of the interpretive theory of law1. Dworkin rejects some aspects of Natural Law Theory and at the same time attacks in a critical but sophisticated way the positivists' approach to law. In order to follow Dworkin's attack is best first to identify the key positions of positivism relevant to the matter under discussion. Positivists say that every society has its special rules which attempt to regulate the citizens' behaviour and provide how the appropriate authority will punish or coerce any unacceptable behaviour. The said rules, positivists continue, may be categorised depending on what their "pedigree" is. They are divided in primary and secondary rules. Primary rules were explained as the rules granting rights or imposing obligations upon the citizens. Secondary rules on the other hand are those rules that lay down the way that must be followed in order to create, amend or abolish primary rules i.e. rules that stipulate how the appropriate legislative body is composed and how it enacts legislation. Positivists add that the community in question follows moral rules as well but the latter are not enforced by the public authority. As long as the cases which need to be regulated are "easy" and there is a corresponding law easily identifiable things run smoothly. When however a "hard case" arises i.e. a case not covered by the "law" as defined by positivists then the judge who has thus run out of "law" will have to exercise his discretion and provide a solution. ...read more.

However he fails to note that Lord Edmund-Davies in the same case takes quite the opposite position14.On the other hand when he is confronted with the fact that judicial decisions are frequently dictated by policy consideration Dworkin replies that in those cases the judge should be understood to be referring to the individual rights of each and every individual member of the community. Once Dworkin distinguished principles and rules he further elaborated on their main differences as to how they apply. The first is that "whereas rules apply in all-or-nothing fashion (either they are valid and dispose of the question, or they are invalid and contribute nothing), principles have a dimension of "weight""15. An example being is the Riggs case where one of the principles "out weighted" the other. The conflicting principles were the principle saying that the courts should follow the clear wording of the statute and on the other hand the principle of "no man should profit from his own wrong". The latter prevailed under the circumstances in order to protect the values and morals of the society. In this case the judge found the conflicting principles applicable to the case and decided which of the two had the greater weight. The latter is a method of interpretation according to Dworkin, who calls this approach 'integrity in law'. By selecting the one of the two applicable principles the unused principle still remains valid whereas if there are two conflicting rules then the one invalidates the other. In the context of his theory, Dworkin puts forward his "one right answer" thesis i.e the proposition that all legal questions have a unique right answer. ...read more.

A good essay that focuses on policy in the context of the Hart - Dworkin debate.

A conclusion based on the student's view of the two arguments would enhance the mark.