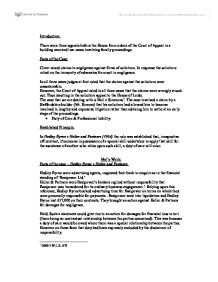 There were three appeals before the House from orders of the Court of Appeal in a building case and two cases involving family proceedings.

Introduction: There were three appeals before the House from orders of the Court of Appeal in a building case and two cases involving family proceedings. Facts of the Case: Client raised claims in negligence against firms of solicitors. In response the solicitors relied on the immunity of advocates from suit in negligence. In all three cases judges at first ruled that the claims against the solicitors were unsustainable. However, the Court of Appeal ruled in all three cases that the claims were wrongly struck out. Thus resulting in the solicitors appeal to the House of Lords. The case that we are dealing with is Hall v Simmons1. The case involved a claim by a Staffordshire builder (Mr. Simons) that his solicitors had allowed him to become involved in lengthy and expensive litigation rather than advising him to settle at an early stage of the proceedings. * Duty of Care & Professional liability: Established Principle: In Hedley Byrne v Heller and Partners (1964) the rule was established that, irrespective off contract, if someone in possession of a special skill undertakes to apply that skill for the assistance of another who relies upon such skill, a duty of care will arise. ...read more.

Lord Steyn: neither salvors nor surgeons are immune from liability fro negligent conduct of a salvage or surgical operation; nor does it seem that the absence of absolute immunity from negligence has disabled members professionals other than the law from giving their best services to those to whom they are rendered. The justifications for immunity do not support it strongly. The cab rank rule can not deprive all clients of a remedy for negligence causing them grievous financial loss. It will bring an end to an anomalous exception to the basic premise that there should be a remedy fro a wrong. There is a fear of unfound actions might have a negative effect on the conduct of advocates. This is a flimsy foundation. In tort law is to set external standards of behaviour for the benefit of the public. Public confidence in the legal system is not enhanced by the existence of the immunity. * What are the justifications of advocacy immunity Lord Steyn: Dignity of the bar, the cab rank principle, the assumption that barristers may not sue for their fees, the undesirability of re-litigating cases decided or settled, and the duty of the barrister to the court. ...read more.

This would usually mean proving that he would of won a case which he lost. This gives rise to apparently conflicting judgments. Public Interest. Members of other professions and the public in general, are bound to view with some skepticism the claims of lawyers that the public interest requires them to have a special immunity from liability for negligence. If there are compelling arguments for such immunity it should be retained without fear of unfounded accusations of collective interests. But those arguments need to be string enough to convince fair minded member of the public. (Need more time on this one.) Vexatious claims by clients. Need more time on this one too. Filled in a bit of it for you mate - Rez. The ruling in this case established that the argument that is an advocate lost his immunity from suit, he would be open to vexatious claims has no validity. The reasoning behind this was that although the criminal advocate is engaged in an activity of great public importance, it would not be right to claim that he is in this respect unique aming professional men - Lord Hoffman. 1 2000 3 W.L.R. 873 ?? ?? ?? ?? ...read more.