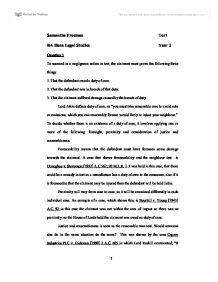 To succeed in a negligence action in tort, the claimant must prove three things

Samantha Freeman Tort BA Hons Legal Studies Year 2 Question 1 To succeed in a negligence action in tort, the claimant must prove the following three things: 1. That the defendant owed a duty of care. 2. That the defendant was in breach of that duty. 3. That the claimant suffered damage caused by the breach of duty. Lord Atkin defines duty of care, as "you must take reasonable care to avoid acts or omissions, which you can reasonably foresee would likely to injure your neighbour." To decide whether there is an existence of a duty of care, it involves applying one or more of the following: foresight, proximity and consideration of justice and reasonableness. Foreseeability means that the defendant must have foreseen some damage towards the claimant. A case that shows foreseeability and the neighbour test is Donoghue v. Stevenson [1932] A.C 562; 20 M.L.R. 1 it was held in this case, that there could be a remedy in tort as a manufacture has a duty of care to the consumer, also if it is foreseeable that the claimant may be injured then the defendant will be held liable. Proximity will vary from case to case, as it will be examined differently in each individual case. An example of a case, which shows this, is Bourhill v. Young [1943] A.C. 92 in this case the claimant was not within the area of impact so there was no proximity, so the House of Lords held the claimant was owed no duty of care. Justice and reasonableness is seen as the reasonable man test. Would someone else do in the same situation do the same? This was shown by the case Caparo Industries PLC v. Dickman [1990] 2 A.C. 605 in which Lord Roskill commented; "It has now to be accepted that there is no simple formula or touchstone" in our scenario was Henry driving negligently? ...read more.

There are three types of nuisance. Statutory nuisance is concerned with central governments concern for health, so statues such as The Noise Act 1996 and The Environmental Protection Act 1990 Part III cover it. The nuisance that this question was concerned with to advise Jerry is public and private nuisance. Public nuisance is "an lawful act or omission which materially affects the reasonable comforts and convenience of life of a class of Her majesty's Subjects" defined in the case Attorney General v. PYA Quarries [1957]. It is normally a crime, but an individual can sue on the grounds that they have suffered special damage. A case that shows public nuisance is Attorney General v. PYA Quarries [1957] 2 QB 169. In this case dust and vibrations from quarrying operations affected local residents, due to the fact so many residents were affected it was classed as a public nuisance. Halsey v. Esso Petroleum Co Ltd 1961 shows special damage. In this case the defendants operated a oil distributing depot, the claimant claimed that acid smuts were damaging their washing. The smuts also caused damage to the car; due to the special damage the claimant could make a claim under public nuisance, and did not need an interest in land. In respect of public nuisance, and advise to Jerry in respect of public nuisance would be that he could argue it was a public nuisance, but would need that the other residents felt this way. He would also need show that he had suffered special circumstances, as seen in the case Halsey v. Esso Petroleum Co Ltd 1961, but I don't think Jerry could show this. I do not think he could sue under public nuisance. "Private nuisance is an unlawful interference with a persons use or enjoyment of land, or some right over or in connection with it" (Cooke 243). A case that shows this Sadleigh - Denfield v. ...read more.

This was shown in the case Tuberville v. Savage [1969], but Jonas did not neutralise his action. If Jonas was found liable for assault and battery, he may be able to use the defence of contributory negligence, Barnes v. Nayer [1986] as Pc Nat did not know that Jonas was congratulating Didier. The third issue of trespass to the person is false imprisonment. False imprisonment is an unlawful justification of constraint on another's freedom of movement, it must be completely deprived. Bird v. Jones [1845] showed this, it was held in this case that there was no false imprisonment, since there was no total restraint. Where a claimants liberty is subject to a reasonable condition, it is not false imprisonment to restrain a claimant, until that condition has been met. Robinson v. Balmain Ferry Co Ltd [1910] held that there was no imprisonment because the condition imposed was a reasonable one in the circumstances. Although knowledge of the restraint at the time is not necessary to succeed in action for false imprisonment. Meering v. Grahame-White Aviation Co Ltd [1919] may show Didier liable for false imprisonment by grabbing Jonas's arm for two minutes. Although it may be seen as subject to a reasonable condition, due to the fact Jonas was going to thump Pc Nat and he stopped it from occurring, Didier would be able to use the defence of necessity. The defence of necessity may be valid to trespass to the person my be valid where the defendant acts for the purpose of protecting the claimants own health and safety. This was seen in the case Leigh v. Gladstone [1909]. In this case it was found it was necessary to intervene because they had a duty to the others in their custody. It could be said that Didier acted on behalf of Jonas' safety and the safety of Pc Nat, by falsely imprisoning Jonas. It also stopped Jonas from being liable for battery. If this was applied Didier would not be liable for false imprisonment. I ...read more.