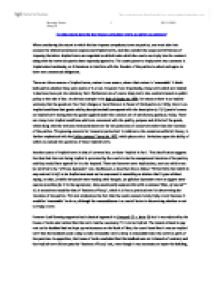 When considering the extent to which the law imposes compulsory terms on parties, one must take into account the distinction between express and implied terms, and also consider the scope and limitations of imposing the latter. Implied terms are regarded as default rules which the courts can imply into the contract along with the terms the parties have expressly agreed to. The courts power to imply terms into contracts is implemented cautiously, as it threatens to interfere with the freedom of the parties to select and agree to their own contractual obligations.

There are three sources of implied terms, custom is one source, where that custom is ‘reasonable’ it binds both parties whether they were aware of it or not. However more importantly, many terms which are implied in law have been put into statutory form. Parliament can of course imply terms into contracts based on public policy or the rule of law. An obvious example is the Sale of Goods Act 1979, for instance there is an implied warranty that the goods are free from charges or incumbrances in favour of third parties (s.12(2)), there is an implied conditions that goods sold by description shall correspond with the description (s.13(1)) and of course an implied term stating that the goods supplied under the contract are of satisfactory quality (s.14(2)). There are many more implied conditions which are concerned with the quality, purpose and defects of the goods, which along with the sections mentioned above are for the protection of consumers rather than the intention of the parties. This growing concern for ‘consumer protection’ in relation to the consumer-welfarism theory, is further emphasised with the Unfair contract Terms Act 1977, which places strict  limitations upon the ability of sellers to exclude the operation of these implied terms.

Another source of implied terms is that of common law, or those ‘implied in fact’. This classification suggests the idea that the term being implied is perceived by the courts to be the unexpressed intention of the parties, and they would have agreed for it to be imposed. There are however some implications, one test which must be satisfied is the ‘officious bystander’ test. MacKinnon L.J describes this as follow: “Prima Facie that which in any contract is left to be implied and need not be expressed is something so obvious that it goes without saying, so that, if while the parties were making their bargain, an officious bystander were to suggest some express provision for it in the agreement, they would easily suppress him with a common ‘Ohm, of course!’” (1) A second test would be that of ‘business efficacy’, which is in fact a practical test for determining the intention of the parties. This test emphasises the fact that the courts cannot merely imply a term because it would be ‘reasonable’ to do so, although the reasonableness is a crucial factor in determining whether or not to imply a term.

However Lord Denning supported such classical approach in Liverpool CC v. Irwin (2) but it was rejected by the House of Lords who insisted that the term must be necessary if it is to be implied. The tenant refused to pay rent as the landlord had not kept up maintenance on the block of flats; the court found that it was an implied term that the landlord owed a duty to take reasonable care to keep in reasonable state the common parts of the premises. In opposition, the House of Lords concluded that the landlord was not in breach of contract, and the implied term did not pass the ‘business efficacy’ test, even though it was necessary to repair the building, it was not necessary for this duty to fall on the landlord. This is an example whereby the extent to which the law can impose compulsory terms is limited, as there are many restrictions.

Other constraints also exist; where one of the parties of the contract did not know of the term which allegedly must be implied, or where it is not clear that both parties would in fact have agreed in the first place. (Shell UK Ltd v. Lostock Garages Ltd. [1976] 1 WLR) & (Luxor (Eastbourne) Ltd. V. Cooper [1941] AC 108). Furthermore, if any express terms are in conflict with the proposed term the courts will be reluctant to impose such a term. Lord Simon stated in BP Refinery (Westernport) Pty Ltd V. Shire of Hastings, that ‘a term will not be implied into a contract if it would be inconsistent with the express wording of the contract’. On the other hand, according to Stuart-Smith LJ ‘a term implied in law may prevail over an express inconsistent term of contract’. It is of course for the courts to decide which approach to follow, but efforts are made for new terms implied by law, to co-exist with the express terms without any conflict. In Johnstone v. Bloomsbury Health Authority (3) a surgeon agreed to work for 40 hours a week, and ‘be available’ each week for up to 48 hours of overtime. It was held that this express term did not rule out the possibility that his employers, might by asking him to work for 88 hours a week, be in breach of the implied term that they would take reasonable care not to endanger his health. Thus the Court of Appeal accepted that the implied term was part of the contract.

Along with terms concerning goods and services, employment is in deed the third major area in which the law imposes compulsory terms. In terms of statute, in the Equal Pay Act 1970 for example, the employer promises to pay a woman employee equal pay to that paid to men. Since contracts of employment were in the past concluded informally with brief oral descriptions, the courts often had to ‘fill in the gaps’ and provide terms of the agreement. For example the employee agrees impliedly to abstain from misconduct and to avoid neglect of the business. With regards to economics, this illustrates the efficiency and utility of contracts as economic mechanisms, implied terms save time and effort of having to repeatedly discuss and agree to terms of contract, and of course it saves transaction costs. This also is the same with standard form contracts, which in contrast, the compulsory terms have been imposed by one of the parties.

Although it may be more efficient, it is true that the extent to which the law imposes implied terms is rather great, and so this reduces the freedom of contract for the parties. An economic perspective suggests, as stated in Hugh Collins ‘The Law of Contract’ that the law should merely provide a set of ‘default rules’ which the parties can be free to exclude, accentuating the need for freedom of contract.

In conclusion, it can be argued that the extent to which compulsory terms are imposed is greater with regards to statutes, rather than common law. Contracts for the supply of goods and services contain important implied terms(4), and the power to exclude these terms is severely restricted by legislation. Although, these terms are for the benefit of the consumer, if it were not for these conditions, sellers of goods would seek to avoid any liability for defects of goods for example. It is greatly left to the courts to ‘fill the gaps’ in contracts, and imply terms which would have been agreed between the parties anyway, or those terms which are so obvious and so have not been mentioned. On the other hand, there are certain limitations to their power; in this sense the extent is certainly restricted. Particular tests must be satisfied and the courts must consider whether both the parties would have agreed to the term, and not just whether a reasonable person would have done so. The courts have not claimed power to insist upon compulsory terms without statutory authority. Therefore the extent is pretty large, but all the same it is proportionate and compulsory terms are only generally imposed when they are actually required or when they are advantageous to the consumer.