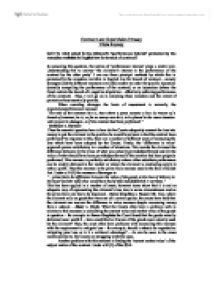 To what extent is the claimant's 'performance interest' protected by the remedies available in English law for breach of contract?

Contract Law: Supervision 9 Essay Tricia Rooney Q.10 To what extent is the claimant's 'performance interest' protected by the remedies available in English law for breach of contract? In answering this question, the notion of 'performance interest' plays a central role. Understanding this to convey 'the claimant's interest in the performance of the contract by the other party' I can see three principal methods by which this is protected by the remedies available in English law for breach of contract - namely damages (and the different measures available) and/or an order for specific injunction (actually compelling the performance of the contract) or an injunction (where the Court restrain the breach of a negative stipulation - effectively enforcing performance of the contract) . Thus, I will go on in analysing these remedies and the extent of protection they essentially provide. When awarding damages the basis of assessment is normally the expectation/performance measure: "The rule of the common law is, that where a party sustains a loss by reason of a breach of contract, he is, so far as money can do it, to be placed in the same situation with respect to damages, as if the contract had been performed." ...read more.

However, the claimant cannot demand to be awarded the cost of curing the breach, in some circumstances it is utterly unreasonable (as in Tito v. Waddell (No.2)) or wholly disproportionate (Jacob & Young v. Kent) to the loss the claimant has suffered and so will not be awarded. However, the Courts still have difficulty with this measure in the sense that they sometimes adopt the non-conventional approach of looking into what the claimant is actually going to do with the damages awarded - and if he is not actually going to cure the breach with them then they tend not to award the amount. Hence, the two principal methods adopted by the Courts in measuring damages pose a certain dilemma: sometimes it is inappropriate to fall back on the market value measure but at the same time the cost of curing the breach is wholly disproportionate to the loss suffered - thus certain claimants are not getting the level of protection by these remedies to truly represent their loss. This came to a head in Ruxley Electronics v. Forsyth where the builders took Mr F to Court to pay his bill (he had been alleging defects all the way through the contract). ...read more.

Also, as stated in the opening paragraph, it must be noted that a certain branch of injunctions granted by the Court have the effect of essentially enforcing performance of the contract even where the contract is held not to be specifically enforceable. Thus, in Metropolitan Electric Supply Co Ltd v. Ginder, an express promise by the defendant to take the whole of his supply of electricity from the Company was held to import a negative promise that he would take none from elsewhere, and an injunction was accordingly granted. Although only a small gateway, this use of an injunction adds to the protection of a claimant's 'performance interest' by filling certain gaps in the specific performance remedy. On the whole, a number of remedies protecting the claimant's 'performance interest' are readily available but depending on the facts of the case will either be adequate or inadequate. Perhaps what needs to be considered, is not whether remedies are available, but whether the remedies that are available are being interpreted or measured correctly - maybe the Courts need to take a more realistic view of 'loss', combining it with 'loss of a bargain', 'loss of a chance' and certain elements of mitigation/subsale before trying to meet the needs of the claimant's performance interest. ...read more.