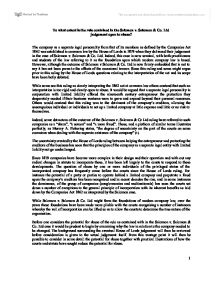 To what extent is the rule contained in the Salomon v. Salomon &amp; Co. Ltd judgement open to abuse?

To what extent is the rule contained in the Salomon v. Salomon & Co. Ltd judgement open to abuse? The company as a separate legal personality from that of its members as defined by the Companies Act 1862 was established in common law by the House of Lords in 1879 when they delivered their judgement in the case of Salomon v. Salomon & Co. Ltd. Indeed, this case is now seminal, with both practitioners and students of the law referring to it as the foundation upon which modern company law is based. However, although the outcome of Salomon v Salomon & Co. Ltd is now firmly embedded that is not to say it has not been prone to the effects of the occasional tremor. Since this ruling and some might argue prior to this ruling by the House of Lords questions relating to the interpretation of the act and its scope have been hotly debated. While some see this ruling as clearly interpreting the 1862 act at common law others contend that such an interpretation is too rigid and clearly open to abuse. It would be argued that a separate legal personality in conjunction with limited liability offered the nineteenth century entrepreneur the protection they desperately needed if their business ventures were to grow and expand beyond their personal resources. Others would contend that this ruling was to the detriment of the company's creditors, allowing the unscrupulous individual or individuals to set up a limited company at little expense and little or no risk to themselves. Indeed, some detractors of the outcome of the Salomon v. Salomon & Co Ltd ruling have referred to such companies as a "sham", "a screen" and "a mere fraud". These, and a plethora of similar terms illustrates perfectly, as Murray A. Pickering states, "the degree of uncertainty on the part of the courts on some occasions when dealing with the separate existence of the company" (1). ...read more.

It was held that the appeal be allowed, and the counter-claim of the company dismissed with costs (both in this hearing and below). Both Vaughan Williams J and the court of Appeal saw it as the duty of the court to look behind the incorporation of the company. Each, for different reasons, felt that Mr Salomon was manipulating "the machinery of the Companies Act, 1862 for a purpose for which it was never intended". (11) However, the House of Lords judgment firmly pulled down the veil of incorporation around the company and its members. It is telling, when Lord MacNaghten referring to Vaughan Williams J. comments on the case stated "Leave out the words 'contrary' to the true intent and meaning of the Companies Act, 1862"(12) It is clear that Lord MacNaghten and his colleagues held that their role was merely to apply and not to interpret the Companies Act, 1862 and that any such interpretation by the courts was out with their jurisdiction. Nevertheless, later courts have found it necessary to lift the veil of incorporation and over the years there has been a number of exceptions to the principle laid down by the Salomon case that the corporation is a separate legal entity. Gonzalo Villalta Puig contends that the verdict reached by the House of Lords in the case of Salomon v. Salomon Co. Ltd created a double-edged sword. While the verdict helped to drive capitalism by established the company as a separate legal entity with limited liability and allowed it (the company) to enter into contracts in its own name it also helped promoted the evasion of legal obligations by allowing these benefits to be harnessed by small private enterprises. Goulding agrees with Puig but goes further by suggesting that individuals are encouraged to seek limited liability by becoming a limited company even when such a step is not necessary in their particular circumstances. ...read more.

The Continental Tyre company was incorporated in England, but all of its directors resided in Germany and all of its shares except one were held by those directors. The secretary held the remaining share, resided in England and was a British subject. The lower court held that the company was incorporated under the Companies Act and was therefore an English company despite its directors being German and an English company cannot cease being an English company because a state of war exists between England and the country in which that company's directors reside. The House of Lords however reversed this decision on the grounds that the secretary was not authorised to commence the action. More importantly it held that the company though incorporated in England was capable of acquiring an enemy character. This decision blurs the distinction between politics and the law and while the exceptions to the Salomon ruling are there to improve the quality of law handed down in terms of equity and fairness it can be argued that House of Lords abused the Salomon ruling by offering a political solution rather than legal ruling to a current dilemma. On matters of tax the courts are, on occasions, prepared to lift the corporate veil and disregard the separate legal personality of companies as was the case in Firestone Tyre and Rubber Co v Llewellin (Inspector of Taxes) [1975]. Reasons for lifting the corporate veil might include companies seeking to evade tax or where they are operating over liberal schemes for the avoidance of taxes. Since the Salomon ruling in 1879 companies have become more and more sophisticated and while the various Companies Acts have in some respect failed to keep up with this growing sophistication it has been left up to the courts to set the guidelines. Companies are no longer the single entities they were one hundred plus years ago. Today, the group of companies exist and with that a whole new set of problems have emerged. 1 ...read more.