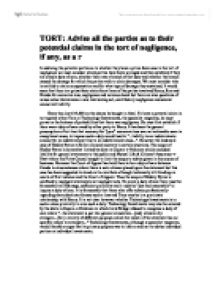 TORT: Advise all the parties as to their potential claims in the tort of negligence, if any, as a r

TORT: Advise all the parties as to their potential claims in the tort of negligence, if any, as a r In advising the potential parties as to whether they have a prima facie case in the tort of negligence we must consider which parties have been wronged and then establish if they are owed a duty of care, whether there was a breach of that duty and whether the breach caused the damage for which the parties wish to claim damages. We must consider who is entitled to claim compensation and for what type of damage they sustained. It would seem that there is a prima facie claim from three of the parties involved Henry, Ron and Brenda for economic loss, negligence and nervous shock but there are also questions of novus actus interveniens a new intervening act, contributory negligence and several concurrent liability. Henry has lost �45,000 on the shares he bought in Abel. To have a potential claim in tort against either Tom or Technology Investments, the specialist magazine, he must prove on the balance of probabilities that there was negligence. He must first establish if there was a duty of care owed by either party to Henry. It has been the general presumption of tort law that recovery for "pure" economic loss was not actionable save in exceptional cases, to impose such a duty would lead to "...liability in an indeterminate amount for an indeterminate time to an indeterminate class...". ...read more.

There is also authority for the argument that a psychiatric illness that is expanded through another's negligence can give rise to liability for the plaintiffs future negligent actions although in this case certain actions failed for policy reasons. The nervous shock must also be a recognised psychiatric illness; mere grief or depression, unless clinical depression, is not sufficient. It would also probably fail on the question of remoteness, in this case was it foreseeable that damage would occur ?, probably not. The accident itself was caused by Henry, he clearly owed a duty of care as a motorist and was negligent in failing to notice that the traffic lights were not in use and not slowing down accordingly, instead he drove straight across without checking for traffic from other directions. Were Henry to be held liable then he may wish to claim that the highway authority is severally concurrently liable in its failure to maintain the traffic lights although if successful any award of damages would be proportionate to the degree of fault. Henry would also wish to claim that Ron was contributory negligent in failing to wear a helmet and damages would be reduced accordingly, 10% in Capps-v-Miller, although it is suggested that if Ron's damage was totally avoidable by the wearing of a helmet he could nevertheless still recover damages. Only if Ron was completely to blame for the accident thus exonerating all others would he lose all claim to damages. ...read more.

If Brenda is to claim her illness is derived from shock, shock being "...a sudden sensory perception..." she would have to advance medical evidence that the shock was an immediate cause and not some later manifestation through being worn down with grief. Brenda would thus seek damages for loss of earning both past and future and any other expenses incurred although she would have a duty to mitigate her losses by, say, obtaining other employment. Any social security paid from the date of claim to the settlement or five years later over and above �2,500 would have to be deducted from any award of damages under the Social Security Act (1989) s22 and paid by the defendant to the Department of Social Security. The fact that Brenda had claustrophobia when she was younger would not however affect her claim as the tortfeasor is said to take the plaintiff, defined as "...the reasonably strong nerved person..", as he finds him. Once the wrong has been established, unless the defendant knew of any special circumstances, assessment of damages covers all reasonable injuries sustained, what is known as the eggshell skull principle, although this principle lost some of its scope in The Edison where damages were awarded for the cost of comparable replacement goods and some loss of earnings not the total loss suffered because of impecuniosity. Claustrophobia is the direct opposite of agoraphobia and has no bearing on the present claim for damages as in this case there is no reoccurrence of the old injury thus an argument that Brenda already suffered some illness would fail on the question of causation, the damage constituting a new illness. ...read more.