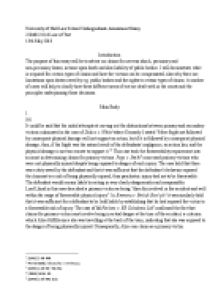 Tort Law Essay . The purpose of this essay will be to advise on claims for nervous shock, pecuniary and nonpecuniary losses, actions upon death and also liability of public bodies.

﻿University of Hull Law School Undergraduate Assessment Essay 22048/22116 Law of Tort 13th May 2013 Introduction The purpose of this essay will be to advise on claims for nervous shock, pecuniary and non-pecuniary losses, actions upon death and also liability of public bodies. I will demonstrate what is required for certain types of claims and how the victims can be compensated, also why there are limitations upon duties owed by e.g. public bodies and the rights to certain types of claims. A number of cases will help to clarify how these different areas of tort are dealt with in the courts and the principles underpinning those decisions. Main Body 1. (A) It could be said that the initial attempts at carving out the distinctions between primary and secondary victims culminated in the case of Dulieu v. White[1]where Kennedy J stated ?Mere fright not followed by consequent physical damage will not support an action, but if it is followed by consequent physical damage, then, if the fright was the natural result of the defendants' negligence, an action lies, and the physical damage is not too remote to support it.?[2] This case took the foreseeability requirement into account in determining claims for primary victims. Page v. Smith[3] concerned primary victims who were not physically injured despite being exposed to danger of such injury. The case held that there was a duty owed by the defendant and that it was sufficient that the defendant?s behavior exposed the claimant to a risk of being physically injured, thus psychiatric injury had not to be foreseeable. ...read more.

She did not fear for her own safety, instead of her children?s safety which essentially allowed her a claim, since the court regarded this particular parent-child relationship as sufficient in terms of proximity. So the application for a secondary victim claim would hence be unsuccessful in this case, however as can be seen below, David would be a successful applicant for this type of claim. (D) David can claim as a secondary victim since he fulfills all the Alcock criteria. Firstly, David was at the scene of the accident a few hours after the event had taken place. Hence, the shock must be sudden. Thirdly, there must be a close tie of love and affection which is present here since it was the body of his son that David had to identify, a parent-child relationship falls within the category of sufficient proximity to the victim (see discussion above). Then, is it reasonably foreseeable that another person would have suffered nervous shock in David?s situation? Quite clearly, yes. In the case of McLoughlin v. O?Brian[15] a woman suffered nervous shock after being notified of the fact that her son had died and her family been injured in a car accident. This claim as a secondary victim was successful despite the woman not being present at the scene of the accident, neither in its immediate aftermath. The court here concluded that it was reasonably foreseeable that another person would have reacted in the same way. ...read more.

The fire brigade had by acting increased the damage. However, it is worth contemplating two additional cases where it was held that no duty was owed by the services. Firstly, in Monroe v. London Fire Brigade[28] the fire officers had negligently left and area situated around an explosion without making sure that there was no risk of fire there. Secondly, in Church of Jesus Christ of the Latter Day Saints v. West Yorkshire Fire & Civil Defense Authority[29] the fire brigade negligently failed to ensure that there was sufficient water supplies to combat a fire. Nonetheless, since none of the rescue services in the above cases contributed positively in creating a dangerous situation for the claimant leading to harm, they were held no to be liable. So with reference to the Hampshire case and the principle of no duty to answer a call, the fire brigade would not be liable to Mr. Smith. Conclusion The distinction between primary and secondary victims has been drawn with reference to cases. The case of Alcock is crucial since it established the criteria for claiming as a secondary victim. Hence, regarding Actions upon death and claims for personal injury, the multiplier and multiplicand have been useful in calculating the proximate award of compensation for the claimant. Regarding the liability of public bodies, there is a distinction drawn between liability of the ambulance service and of the fire brigade. ...read more.