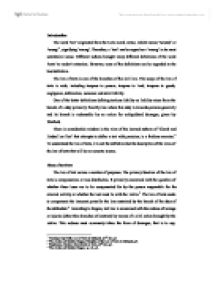 Introduction The word 'tort' originated from the Latin word, tortus, which means 'twisted' or 'wrung'1, signifying 'wrong'. Therefore, a 'tort' can be regard as a 'wrong' in its most untechnical sense. Different authors brought many different definitions of the word 'torts' to reader's attention. However, none of the definitions can be regarded as the best definition. The law of torts is one of the branches of the civil law. The scope of the law of torts is wide, including trespass to person, trespass to land, trespass to goods, negligence, defamation, nuisance and strict liability. One of the better definitions defining tortious liability as liability arises from the breach of a duty primarily fixed by law where this duty is towards persons generally and its breach is redressable by an action for unliquidated damages, given by Winfield. There is considerable wisdom in the view of the learned authors of 'Cleark and Lindsell on Tort' that attempts to define a tort with precision, is a fruitless exercise.2 To understand the law of torts, it is not the definition but the description of the aims of the law of torts that will be an accurate source. Aims of tort law The law of tort serves a number of purposes. The primary function of the law of torts is compensation or loss distribution. It primarily concerned with the question of whether these loses are to be compensated for by the person responsible for the relevant activity or whether the lost must lie with the victim.3 The law of torts seeks to compensate the innocent party for the loss sustained by the breach of the duty of the defendant.4 According to Rogers, tort law is concerned with the redress of wrongs or injuries (other than breaches of contract) by means of a civil action brought by the victim. This redress most commonly takes the form of damages, that is to say, monetary compensation.5 A claimant who manages to establish liability against another under the rules of tort shifted the loss to the person, the tortfeasor, who apparently brought such loss into being. ...read more.

Further, in tort, the defendant 'sued' by the plaintiff/claimant, and the defendant may be found 'liable' or 'not liable'. In criminal proceeding, the 'accused' is 'prosecuted' by the public prosecutor and might be found 'guilty' or 'not guilty'. A breach of trust and a tort are both civil wrongs but difference. A tort gives rise to an action for damages; a breach of trust gives rise to an action for restitution. The law of trusts is more limited in scope as it applies to trustees only. The trustee's obligation arises from the special relationship created by the trust itself as opposed to arising from principles of law.15 In order to distinguish a tort from a breach of trust, the test of an action for unliquidated damages can be used. The law of restitution and tort seem to have a same function that is for the victims to recover for their loss. However, they can be distinguished, as under the law of restitution, the plaintiff does not need to prove the wrongfulness of the other party. Restitution can be claimed for recovery of an advance payment made under a contract that had not performed, the recovery of money paid by mistake, or the recovery of goods, land, services or some other 'benefits' not including damages based on injury or loss or expectancy. In contrast, to claim under tort, the plaintiff have to prove that the defendant act illegally. The plaintiff can claim to recover damages based on injury, loss or expectancy under tort law. In reality, the law of tort and other laws although distinguishable in certain aspect cannot be differentiating as a whole. However, as per Lord Roskill in Junior Books Ltd. v. Veitchi Co. Ltd.: 'today the proper control lies not in asking whether the proper remedy should lie in contract...or tort, not in somewhat capricious judicial determination whether a particular case falls on one side of the line or the other...but in the first instance in establishing the relevant principles and then ...read more.

Therefore, as long as the court decides as fair and as just it could be, taking into account the facts in each case, it should not be a 'must to' to meet all the aims of tort. Conclusion Tort law changes very fast. In Malaysia, courts are putting effort on to develop our own tort law. One can clearly identify this situation where in the pass few years, not all the changes in England have been reflected in Malaysia. Despite the significant development of tort law, it reveals the difficulties of tort law in order to serve the society. One of the difficulties in tort law is that there is too much uncertainty in the law of tort because of the operation of judicial policy. Although it is possible for the law of tort to be adapted by judges to meet changing social needs and circumstances, this can also mean that it is difficult too for lawyers predict the outcome of individual cases in order to advise their clients.28 In addition, courts regularly meet with problems in order to grant remedies to the parties to the dispute. For instance, A's activity may be regarded as socially or economically valuable, and B's damage an unfortunate but unavoidable consequence. In such situation, the court might found difficult to come into decision. This clearly demonstrated in Tenaga Nasional case.29 Besides, in many cases, the court will found themselves facing problems in striking a balance between competing claims and values. As in many disputes, it will certainly involve both parties' rights and interests. For example, strict rules on defamation will limit freedom of speech; by contrast, will defeat the aim in protecting reputation. However, despite some defects, tort law is a good law. Tort plays an important role on encouraging careful conduct and risk management. This prevents injury to individuals and their property, reduces the spread of disease and the manufactures of the dangerous products. Tort also has a symbolic moral value. The focus in legal actions is always on the wrongful act and loss distribution is a consequential list factor. ...read more.