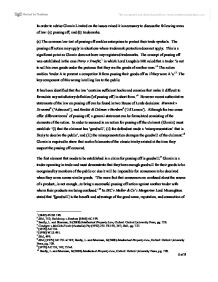 Trademarks and Passing Off

In order to advise Glamix Limited on the issues raised it is necessary to discuss the following areas of law: (a) passing off, and (b) trademarks. (a) The common law tort of passing off enables enterprises to protect their trade symbols. The passing off action may apply in situations where trademark protection does not apply. This is a significant point as Glamix does not have any registered trademarks. The concept of passing off was established in the case Perry v Truefitt,1 in which Lord Langdale MR ruled that a trader 'is not to sell his own goods under the pretence that they are the goods of another man.'2 The action enables 'trader A to prevent a competitor B from passing their goods off as if they were A's.'3 The key component of this wrong is telling lies to the public. It has been identified that the law 'contains sufficient hooks and crannies that make it difficult to formulate any satisfactory definition [of passing off] in short form.'4 However recent authoritative statements of the law on passing off can be found in two House of Lords decisions: Warnink v Townend5 ('Advocaat'), and Reckitt & Colman v Bordern6 ('Jif Lemon'). Although the two cases offer different terms7 of passing off, a general statement can be formulated consisting of the elements of the action. ...read more.

used on Glamix's shampoo. In Taittinger v All Bev30 the Court of Appeal held that by labelling their drink 'Elderflower Champagne', the defendant's had made a misrepresentation that they were part of the group of champagne producers. In relation to action, Supergiant has manufactured their shampoo to look like Glamix's shampoo in the mermaid shaped bottle. This conduct could lead to consequences such as misrepresentation as to the source, quality and as to control or responsibility over the claimant's goods. Glamix needs to demonstrate that Supergiant's31 misrepresentation is deceptive and has confused a substantial32 number of persons among the public33or is likely to do so. The third element of an action for passing off is proof that the misrepresentation damages the goodwill of the claimant. In this situation damage may occur in several forms: loss of existing trade and profit, loss of potential trade and profit34, and damage to reputation.35 If Glamix can fulfil the necessary requirements for the three elements for passing off they will be able to prevent Supergiant from selling Reflex Shampoo. According to relevant case law it is likely that Glamix will succeed in such a claim. (b) The legal regime for the registration of trademarks is enshrined in the Trade Marks Act 1994. ...read more.