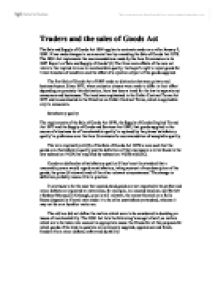 Traders and the sales of Goods Act

Traders and the sales of Goods Act The Sale and Supply of Goods Act 1994 applies to contracts made on or after January 3, 1995. It has made changes to commercial law by amending the Sale of Goods Act 1979. The 1994 Act implements the recommendations made by the Law Commission in its 1987 Report on 'Sale and Supply of Goods' (1) The three main effects of the new act relate to the implied term as to merchantable quality, the buyer's right to reject goods for trivial breaches of condition and the effect of a rejection of part of the goods supplied. The first Sale of Goods Act of 1893 made no distinction between private and business buyers. Since 1973, when exclusion clauses were made to differ in their effect depending on precisely this distinction, there has been a trend for the law to separate out consumers and businesses. The trend was emphasised in the Unfair Contract Terms Act 1977 and is accentuated in the Directive on Unfair Contract Terms, which is applicable only to consumers. Satisfactory quality The requirements of the Sale of Goods Act 1979, the Supply of Goods (Implied Terms) Act 1973 and the Supply of Goods and Services Act 1982, that goods supplied in the course of a business be of 'merchantable quality' is replaced by the phrase 'satisfactory quality' in preference over the Law Commission's recommendation of acceptable quality. The term implied by s14(2) of the Sale of Goods Act 1979 is now such that the goods are of satisfactory quality and the definition of that expression is to be found in the new subsection 14(2A) ...read more.

to reject goods that did not correspond with their description whilst accepting those that did. In a new s35A this right of partial rejection has been extended. It was once the case that acceptance by the buyer of all or any part of the goods, precluded the buyer from being able to reject any of the goods. However, there were exceptions to the rule: (i) in the case of a severable contract, where acceptance of goods under one severable part of the contract did not preclude the possibility of rejecting the goods under another part; (ii) where more goods than the contract quantity were delivered, the buyer having the option to accept the correct quantity and reject the rest; (iii) where the contract goods were delivered together with some goods which did not meet the contract description, the buyer having the option of accepting those goods which did not comply with the contract description. The first two exceptions remain but the third has been replaced by a new s35A of the Sale of Goods Act. In order to exercise a right of partial rejection under this provision, the buyer must first have a right to reject the goods (since s35A does not manufacture a right of rejection where none existed before), e.g. because of a breach of condition, and must secondly, accept all the goods which comply with the contract. Providing he accepts all of the goods which comply with the contract, he is not precluded from rejecting all, or some, of those which do not. Although s35A(4) states that this section applies only if a contrary intention does not appear. ...read more.

Other legal systems allow buyers to sue higher links in the contractual chain, recognising that the manufacturer should be responsible for the quality and also the safety of his products. The most notable is the French system with the 'action directe.' Market overt Another legislative change to the Sale of Goods Act 1979 was made in 1994. Also from 3 January 1995, pursuant to the quite separate legislation of the Sale of Goods (Amendment) Act 1994, the provisions of the Sale of Goods Act 1979 relating to market overt are repealed. The exception to the nemo dat rule has now gone. The market ouvert rule applied to markets which existed since 'time immemorial' or those established by charter. The rule bypassed the normal presumption that good title cannot pass to a purchaser of stolen goods. The rule had been described as a thieves' charter. Conclusion I suggest that the changes made in 1994 are to the disadvantage of traders, however, they are to the advantage of consumers. The 1994 Act replaced the old 'merchantable quality' requirement with the new phrase 'satisfactory quality.' The new requirement is a tougher standard for traders to meet. Goods now have to be fit for all common purposes. Consumer buyers retain the right to reject for any breach of condition, whereas the non-consumer buyer now cannot reject for minor breaches. The acceptance standard has changed. The buyer now has a 'reasonable length of time' to inspect the goods before he is deemed to have accepted them, even repair or sub-sales no longer bar rejection of the goods. The market ouvert rule has now gone, buyers and sellers alike now cannot take good title to stolen goods, even if purchased in 'good faith.' There is a strong case for separate consumer and commercial legislation. ...read more.