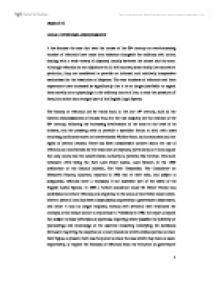 Tribunals. The vast numbers of tribunals and their importance have increased so significantly that it is no longer justifiable to regard them merely as an appendage to the ordinary courts of law, to ease the pressure off them, but rather as an integral pa

LEGAL SYSTEMS ASSIGNMENT It has become the case that over the course of the 20th century an ever-increasing number of tribunals have come into existence alongside the ordinary civil courts, dealing with a wide variety of disputes, usually between the citizen and the state. Although tribunals do not adjudicate in all civil matters, some family law matters in particular, they are considered to provide an informal and relatively inexpensive mechanism for the resolution of disputes. The vast numbers of tribunals and their importance have increased so significantly that it is no longer justifiable to regard them merely as an appendage to the ordinary courts of law, to ease the pressure off them, but rather as an integral part of the English Legal System. The history of tribunals can be traced back to the late 18th century, such as the General Commissioners of Income Tax, but the vast majority are the creation of the 20th century, reflecting the increasing involvement of the state in the lives of its citizens, and the pressing need to provide a specialist forum to deal with cases involving conflicts between an interventionist Welfare State, its functionaries and the rights of private citizens. There has been considerable concern about the use of tribunals as a mechanism for the resolution of disputes, particularly as it was argued that only courts had the constitutional authority to perform this function. One such vehement critic being the then Lord Chief Justice, Lord Hewart, in the 1929 publication of his famous polemic, The New Despotism. The Committee on Minister's Powers, however, reported in 1932 that in their view, and subject to safeguards, tribunals were a necessary if not desirable part of the fabric of the English Justice System. ...read more.

Universities and Trade Unions too have disciplinary bodies that decide whether a member should be disciplined if an allegation of an infringement of the rules is established. Since the majority of domestic tribunals are not presided over by a judge, or besides matters involving the legal profession, even a legally qualified person, it is essential that the proceedings are conducted observing a substantial degree of procedural fairness. Two basic principles of natural justice are applied: that the person making the decision should be independent and unbiased, so as 'no person should be a judge in his own case'; and also that both sides must be given a fair hearing. In addition the tribunal should provide reasons for its final decision at the end of proceedings to demonstrate that it is fairly and properly made. The same high standards obtaining in an ordinary court are not expected of a tribunal, but the proceedings must be conducted as fairly as possible and a decision can be challenged in the courts if it is blatantly unfair. There is an automatic right of appeal to the Judicial Committee of the Privy Council from the decisions of those tribunals dealing with complaints against doctors, dentists and opticians, and decisions may be reviewed by the High Court where an injustice has been done. In Lee v Showmen's Guild (1952), the claimant successfully challenged the decision of the Guild's committee to withdraw his membership in the High Court. In the subsequent appeal to the CA, it was decided that the courts had jurisdiction to examine any decision of the committee involving a question of law, and this would extend to the interpretation of the committee's rules. ...read more.

the position of lay members, the President of the Division should be given discretion as to whether lay members should sit in a case, as there is no justification for lay members to sit unless they have a particular function to fulfil; that the Council on Tribunals should be given extended powers to monitor the progress in the implementation of the tribunal system, and check that the practices and procedures of the government departments were compliant with the European Convention on Human Rights. In conclusion therefore, it can be seen that tribunals are much more than merely a cheaper alternative to the courts of law. In his Review, Sir Andrew Leggatt found that nearly one million cases a year are heard by the 70 different tribunal systems in England and Wales. Though every civil dispute cannot be heard by tribunals, certain family and criminal matters for example, such a high figure is indicative of the increasingly significant role tribunals have to play in the English administrative system. Hence every attempt must de made to further develop tribunals as a more effective and efficient forum for the resolution of civil disputes. Subsequent to the Reviews recommendations, the Lord Chancellor's office revealed the government's intention to institute a new unified Tribunals Service. Thus by combining the administration, it will deliver a more efficient and effective service to the users of tribunals. Accountable to the Lord Chancellor, the service will bring together the 10 largest from across Central Government, with smaller tribunals joining as appropriate. The 10 tribunals concerned are: the Appeal Service; the Immigration Appellate Authority; the Employment Tribunals Services; the Criminal Injuries Compensation Appeals Panel; the Mental Health Review Tribunal; the Office for Social Security and Child Support Commissioners; the Tax Tribunals; and the Special Education Needs and Disability Tribunal. ...read more.