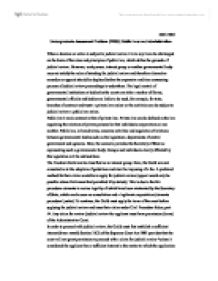 200127801 Undergraduate Assessment Problem [22035] Public Law and Administration. When a decision or action is subject to judicial review it is to say it can be challenged on the basis of the rules and principles of public law, which define the grounds of judicial review. However, each person, interest group or another governmental body may not satisfy the rules of standing for judicial review and therefore alternative remedies or appeals should be depleted before the expensive and time consuming process of judicial review proceedings is undertaken. The legal control of governmental institutions or bodies by the courts can take a number of forms; governmental officials and bodies are liable to be sued, for example, for torts, breaches of contract and trusts- a private law action-or the activities can be subject to judicial review-a public law action. Public law's main contrast is that of private law. Private law can be defined as the law regulating the relations of private persons-be that individuals corporations or one another. Public law, in broad terms, concerns activities and regulation of relations between governmental bodies such as the legislature, departments of central government and agencies. Here, the scenario provides the Secretary of State as representing such a governmental body. Groups and individuals clearly affected by this legislation will be advised here. ...read more.

The type of private law injunction appropriate here would be a prohibitory injunction, preventing a further ultra vires act. However, in order to obtain the remedies of private law, it is not appropriate to gain through the judicial review procedure since a dispute of fact would be the process rather than the review of decisions taken in the process and Part 30 of the Civil Procedure Rules enables a transfer between public and private law procedures simpler. The Smokers Society, an interest group, was clearly under an assurance by the Secretary of State of the limit of cigarettes for personal use. The change in policy by the Secretary of State shaped a legitimate expectation, that the limit of cigarettes would be 12,000, rather than the now 8,000 this change of which the Society was not consulted about. The fact that the Secretary of State declined to have further contact with the Society can be construed as maladministration. Before any procedure can be advanced, the Society must gain leave of the court i.e. acquisition of permission to proceed and their case must be made within the three month time limit set in the Civil Procedure Rules part 54 rule 54.5.1. The 'sufficient interest' test must also be qualified, again at the courts discretion R v. ...read more.

In the context of irrationality (or 'Wednesbury unreasonableness'19) Judges created a fiction by saying that, in giving a power to a decision maker, Parliament would never expect the decision maker to use the power unreasonably. Thus, this decision maker using his discretionary powers unreasonably would be acting ultra vires and is therefore subject to judicial review. The irrational decision the Secretary of State reached to investigate the haulage company under the preconception of dealing with them in the past would be classed as 'Wednesbury unreasonableness'. Misfeasance in public office is the only public law tort only applying to the activities of public bodies. The tort is committed if the official whose action inflicted injury on the claimant either knew the action was ultra vires or acted for improper purpose. From the case Rookes v. Barnard20 this is, 'oppressive, arbitrary or unconstitutional action,' of which the haulage company can establish easily. A private law remedy could be to claim for damages for the inconvenience caused to the haulage company. Under a public law remedy, a mandatory order could be issued. The Drinker's Club though an interest group and therefore may have a weak claim for standing however, they have brought a claim concerning a Convention right and may claim under the Human Rights Act 1998 for the freedom of the individual free move of goods. However, no remedy could be sought but a formal procedure possibly. Their claim would be too weak. ...read more.