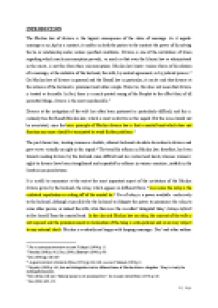 ﻿INTRODUCTION The Muslim law of divorce is the logical consequence of the status of marriage. As it regards marriage as an Aqd or a contract, it confers on both the parties to the contract the power of dissolving the tie or relationship under certain specified conditions. Divorce is one of the institutions of Islam regarding which much misconception prevails, so much so that even the Islamic law as administered in the courts, is not free from these misconceptions. Muslim law knows various forms of dissolution of a marriage, at the initiative of the husband, the wife, by mutual agreement, or by judicial process.[1] On Muslim law of divorce in general and the Hanafi law in particular, it can be said that divorce at the instance of the husband is prominent and rather simple. However, this does not mean that divorce is treated as desirable. In fact, there is a much quoted saying of the Prophet to the effect that, of all permitted things, divorce is the most reprehensible.[2] Divorce at the instigation of the wife has often been portrayed as particularly difficult, and this is certainly true for Hanafi Muslim law, which is most restrictive in this regard. But the issue should not be overstated, since the basic principle of Muslim divorce law is that a marital bond which does not function any more should be terminated to avoid further problems.[3] The pre-Islamic law, treating women as chattels, allowed husbands absolute discretion to divorce and gave wives virtually no right in this regard.[4] The trend for reforms in Muslim law, therefore, has been towards making divorce by the husband more difficult and less instant and harsh, whereas women?s rights to divorce have been strengthened and expanded by reforms in various countries, notable in the South Asian jurisdictions. It is useful to summarise at the outset the most important aspect of the institution of the Muslim divorce given by the husband, the talaq, which appears in different forms.[5] In essence the talaq is the ...read more.

These are first of all the pronouncement of talaq must be proved (it is not sufficient to merely state in court in a written statement or in some other pleading that talaq was given at some earlier point of time), then reasonable cause must be shown as also the attempt at reconciliation must be demonstrated to have taken place Also the husband has to duly establish that he has properly followed the procedure of divorce as laid down in the Quran. Therefore, we see, that only that talaq will be validated by the Court which is in consonance with the basic tenets of the Holy Quran and any procedure that is against the injunction of the Holy Quran will not be accorded the validity of law. At the same time, it needs to be highlighted that under Muslim law, even though marriage is a contract, the husband and the wife are under a moral and legal obligation to fulfil their duties towards each other and cannot cut off their marital ties whenever they want without any legitimate reason. A husband while practicing his right to pronounce divorce on his wife should follow the said procedure as laid down in the Holy Quran and avoid as far as he can to exercise this right. It will be in the betterment of the Muslim Community if the customary law of talaq is codified by the Parliament just like the Hindu Marriage Act. Such a law will not only create an awareness of the correct procedure as ordained in the Quran but will also make sure that the Muslim husband while exercising his right to pronounce divorce does not abrogate his wife?s fundamental rights. Such a law would remove the misgivings and fallacies that exist in Islam on this particular subject of talaq and will bring about a clarity which will not only help the cause of the Muslim women but the entire Muslim Community as a whole. ...read more.