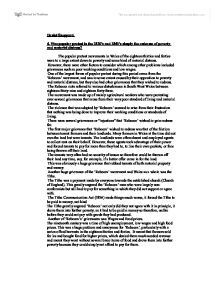 Was popular protest in the 1830's and 1840's simply the outcome of poverty and material distress?

Daniel Sheppard. 4. Was popular protest in the 1830's and 1840's simply the outcome of poverty and material distress? The popular protest movements in Wales of the eighteen thirties and forties were to a large extent down to poverty and some kind of material distress. However, there were other factors to consider which among other problems included grievances such as poor working conditions and low wages. One of the largest forms of popular protest during this period came from the 'Rebecca' movement, and was to some extent caused by their opposition to poverty and material distress, but they also had other grievances that they wished to redress. The Rebecca riots referred to various disturbances in South West Wales between eighteen thirty-nine and eighteen forty-three. The movement was made up of mainly agricultural workers who were protesting over several grievances that arose from their very poor standard of living and material distress. The violence that was adopted by 'Rebecca' seemed to arise from their frustration that nothing was being done to improve their working conditions or standards of living. There were several grievances or "injustices" that 'Rebecca' wished to gain redress for. ...read more.

Tolls were usually valid for twenty-four hours, which often did not let men get back and forth to market to sell their goods in time, which meant they had to pay twice. This infuriated the 'Rebecca' men who began attacking these tollgates in disgust. The most famous example of this occurred in Efailwen. On June 6th eighteen thirty-nine, four hundred men attacked and destroyed the Whitland Trust in Efailwen in protest at the high prices and poor road conditions on the trust. It is quite obvious that part of 'Rebecca's' protests were against the ever-increasing level of poverty and material distress they were experiencing. However, they were also protesting about several other grievances which the though equally important, such as poor working conditions and high food prices. Another of the great forms of popular protest of this era came from the Chartists. The main aim of the chartists, who enjoyed large support from Wales, was to get the six points of the Peoples Charter incorporated into English and Welsh law. Chartism in Wales was set up in eighteen thirty-six, many of the founders were also involved in the Rebecca riots, they were both sympathetic to each others cause. ...read more.

The workers were already struggling to cope with the meagre wages paid to the by the ironworks. Lowering wages would surely have meant certain poverty for most, so they reacted by rioting to try and get what they wanted, but it did not work. These main protest movements did however bring about some success. As a result of the 'Rebecca' riots, a Royal Commission was set up in eighteen forty three to consider the grievances of the rioters and investigate the problems of the 'Turnpike Trusts'. In eighteen forty-four the Royal Commission report was issued. As a result of its recommendations many trusts were joined and tolls were standardised and reduced. This somewhat eased the protesters grievances but still did not give relief to all the grievances. In many ways it could be true to say that many of the popular protest movements of the eighteen thirties and forties were born out of poverty and material distress. Both the 'Rebecca' riots and the Chartist movement had grievances which they felt left them in poverty, such and the Tithe, high food prices, 'Turnpike Trusts' and the Poor Law. However, they both had other grievances that they protested about out of principle, and not poverty, such as the actions of landlords agents and the points of the peoples charter, which they felt equally strong about. Essay word count :- 1557. ...read more.